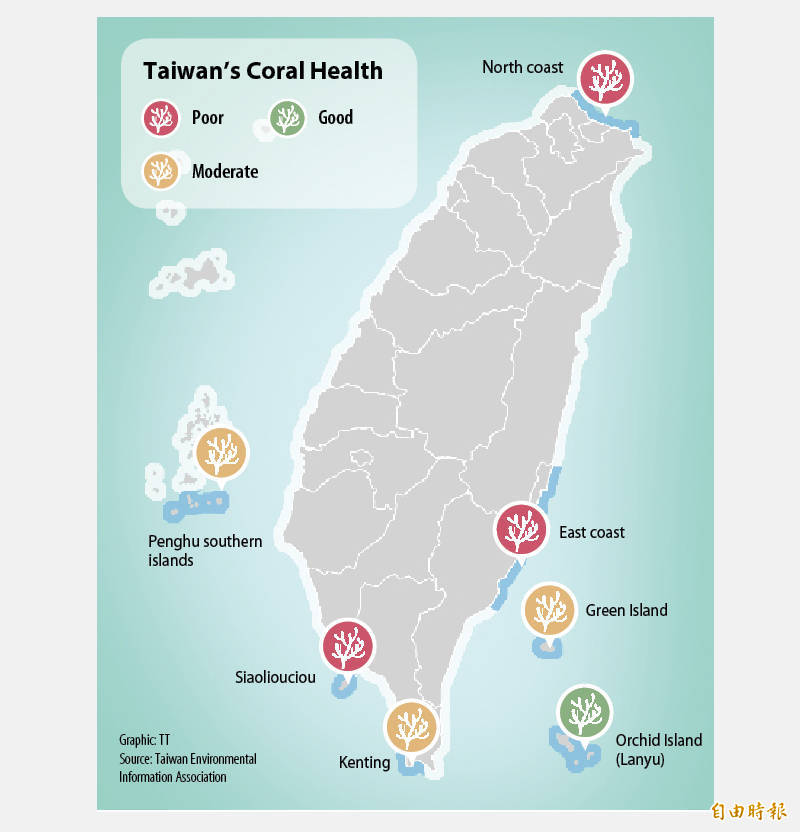 Coral reefs surrounding Siaoliouciou Island （小琉球） are not likely to recover naturally after the percentage of live coral cover dropped to 10 to 20 percent, the lowest in the nation’s waters, experts told a news conference in Taipei yesterday.

The Taiwan Environmental Information Association released the results of a study from 2009 to 2020 ahead of World Oceans Day today.

Since 2009, the association has been monitoring changes in coral reefs off Taiwan’s north, northeast, east and south coasts, as well as those off Green Island （綠島）, Orchid Island （Lanyu, 蘭嶼）, Siaoliouciou and Penghu County, it said.

The association rated the condition of coral reefs in these locations. A red alert was given to coral reefs off the north, northeast and east coasts, as well as those off Siaoliouciou, as the health of these reefs is in peril, it said.

A yellow alert was given to reefs surrounding Green Island, Kenting National Park and four islets south of Penghu.

Coral reefs surrounding Orchid Island were given a green rating, as they are in good health, the association said, adding that it is the only place in Taiwan with healthy coral reefs.

The live coral cover percentage was about 20 to 30 percent off the north and northeast coasts, and about 30 to 40 percent along the east coast, the study found.

Frequent development of coastal areas, excessive plant and algae growth, and tourism activities were identified as possible reasons for the reduced live coral cover in these areas, the association said.

The decline in live coral cover off Kenting, Siaoliouciou, Orchid Island and Penghu occurred due to bleaching caused by rising sea temperatures, the association said.

While coral reefs off Orchid Island, Kenting and Penghu have recovered slightly, those surrounding Siaoliouciou had shown no sign of natural recovery as of 2020, with the live coral cover percentage at 10 to 20 percent, it added.

Allen Chen （陳昭倫）, a research fellow at Academia Sinica’s Biodiversity Research Center, said Siaoliouciou is a coral island, but the reefs there have continued to decline over the past 20 to 30 years.

“Academically speaking, coral reefs in Siaoliouciou have passed the critical point for resilient recovery of an ecosystem. It is like a golf ball falling into a hole: It is impossible for the ball to crawl back to the surface by itself. We need to figure out ways to help bring the ball back to the surface,” Chen said.

As coral reefs in Siaoliouciou are unlikely to recover naturally, the government should consider limiting tourists in the area, control pollution and implement other conservation measures, he said.

Association secretary-general Chen Juei-pin （陳瑞賓） said Taiwan urgently needs to pass an ocean conservation law that would allow the government to designate 30 percent of the waters around Taiwan as a protected zone.

“Regulations governing the environmental impact assessment and the Coastal Zone Management Act （海岸管理法） should require developers in coastal areas to assess the impact their projects would have on the marine environment,” Chen Juei-pin said.