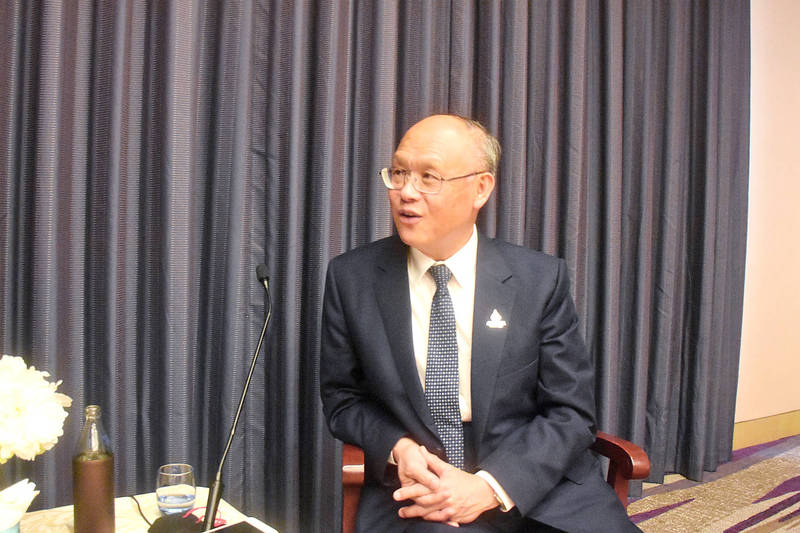 Minister Without Portfolio John Deng speaks with the Central News Agency, while attending the APEC trade ministers’ meeting in Bangkok, Thailand, on May 22. Photo: CNA

Taipei said it would continue efforts to join the Indo-Pacific Economic Framework for Prosperity （IPEF）, and a source has provided specific details of its plans to attend events next month to deepen US-Taiwan economic collaborations.

US President Joe Biden launched the IPEF on his visit to Japan on Monday with 13 nations joining initially, while Fiji on Friday signed on to the trade group.

Biden described the IPEF as “writing new rules for the 21st-century economy.”

Taipei plans to arrange a meeting between Minister Without Portfolio John Deng （鄧振中） and US Trade Representative Katherine Tai （戴琪）, a person familiar with the matter said.

Tai and Deng met on May 20 in Thailand, and a second meeting could focus on supply chain collaborations, expedited and facilitated trade, and agreements regarding agricultural goods, the source said.

It is customary to allow the US to announcement details of such meetings, the source said, adding that Taipei is withholding comment until then.

Deng is to head a delegation to participate in the annual SelectUSA Investment Summit from June 26 to June 29, and is expected to meet with other US officials in Washington, the source said.

The National Development Council Minister Kung Min-hsin （龔明鑫） is also to head a delegation of 5G network industry representatives to participate in the summit, the source said.

After the summit concludes, Kung and the delegation are expected to attend a Taiwan-US investment event in Silicon Valley.

This event would attempt to introduce collaborative opportunities to both sides, with 5G network equipment and 5G enterprise network solutions being anticipated sectors of collaboration.

Kung is also expected to visit Microsoft’s headquarters in Seattle to explore possible 5G development collaborations with the tech giant.