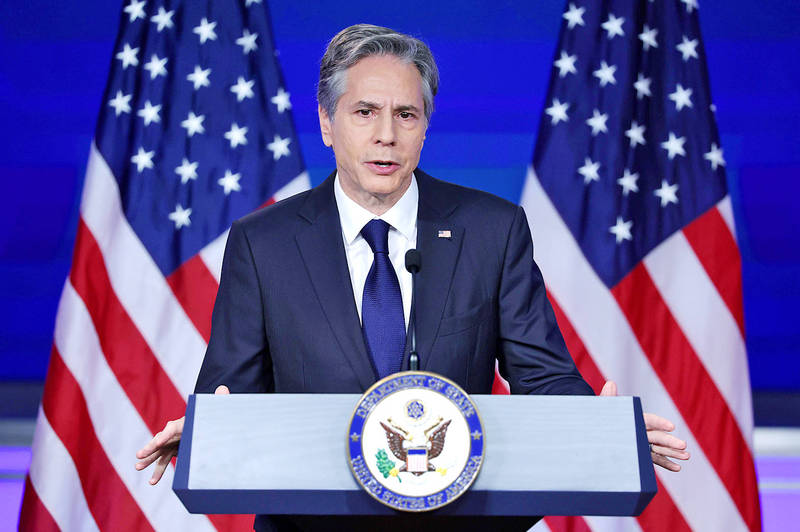 THREAT TO PEACE: Washington plans to ‘responsibly’ manage its relationship with Beijing to maintain stability in the Taiwan Strait, US Secretary of State Blinken said

China’s increasingly provocative rhetoric and actions against Taiwan are “deeply destabilizing,” US Secretary of State Antony Blinken said during a key China policy speech on Thursday.

“Beijing is engaged in increasingly provocative rhetoric and activity, like flying PLA [Chinese People’s Liberation Army] aircraft near Taiwan on an almost daily basis,” Blinken said in the 45-minute speech at George Washington University in Washington, during which he outlined the US administration’s policy toward China.

“These words and actions are deeply destabilizing,” and “risk miscalculation and threaten the peace and stability of the Taiwan Strait,” he said.

Blinken said that the US would manage its relationship with China “responsibly” to maintain peace and stability in the Taiwan Strait, which he said is “a matter of international concern” and “critical to regional and global security, and prosperity.”

However, Blinken said that US policy on Taiwan has not changed.

The US “remains committed to our ‘one China’ policy, which is guided by the Taiwan Relations Act, the Three Joint Communiques [and] the six assurances,” he said.

“We oppose any unilateral changes to the status quo from either side. We do not support Taiwan independence and we expect cross-strait differences to be resolved by peaceful means,” he added.

Blinken said that the US would continue to uphold its commitment to assist Taiwan in maintaining sufficient self-defense capability in accordance with the Taiwan Relations Act, which has served as the foundation for Taiwan-US relations since 1979.

The US would also “maintain our capacity to resist any resort to force or other forms of coercion that would jeopardize the security or the social or economic system of Taiwan,” he said.

Blinken also said that the US would continue to expand its cooperation with Taiwan on many shared interests and values.

Su thanked Blinken for voicing concern over China’s military maneuvers and vowed that Taiwan would defend itself and work with other countries to contribute to the peace and stability of the region.

From Blinken’s speech, it is evident that the US is highly concerned about China’s suppression of Taiwan in multiple areas, party spokeswoman Hsieh Pei-fen （謝佩芬） said.

In the South China Morning Post ahead of Blinken’s speech on Thursday, Chinese Ambassador to the US Qin Gang （秦剛） wrote an op-ed entitled “One China principle is the bedrock of peace across the Taiwan Strait.”

“This bedrock, however, is in peril like never before,” he wrote, blaming Taipei and Washington for “hollowing out” the “one China” policy, while Beijing is “doing our utmost for a peaceful reunification.”

Ting Shu-fan （丁樹範）, professor emeritus at National Chengchi University, said that Blinken merely reiterated the US’ existing stance by saying the nation would try to enhance its relationship with Taiwan in accordance with its “one China” policy.

Blinken’s remarks did not come as a surprise, nor did they contain the more assertive wording used by US President Joe Biden, Ting said, referring to the president’s comments in Tokyo on Monday suggesting the US would intervene militarily if China were to attack Taiwan.