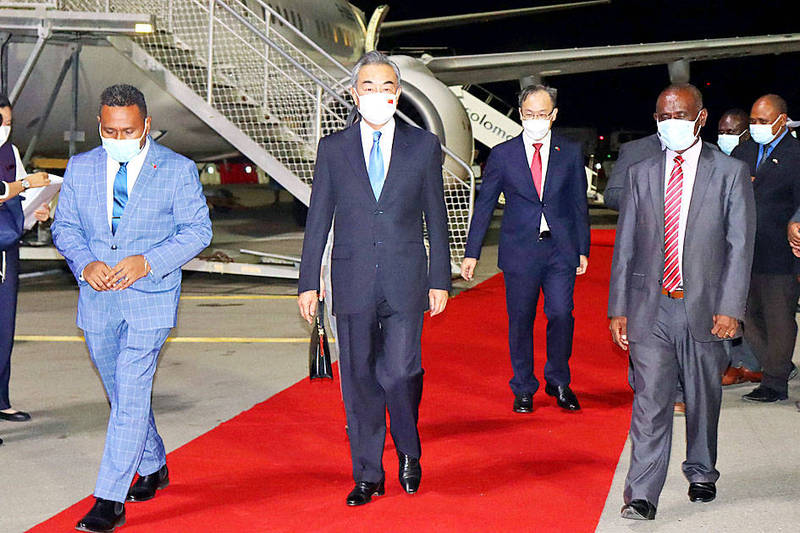 The Ministry of Foreign Affairs yesterday called on Pacific island countries to heed China’s true purpose behind its aid, as Chinese Minister of Foreign Affairs Wang Yi （王毅） arrived in the Solomon Islands at the start of an eight-nation tour.

His visit came amid growing concerns about Beijing’s military and financial ambitions in the South Pacific region, after a draft document was leaked showing that he hoped to strike a sweeping agreement with 10 Pacific nations on everything from security to fisheries.

In Taipei, Ministry of Foreign Affairs deputy spokesman Tsuei Ching-lin （崔靜麟） said that it would continue to pay close attention to Wang’s visit.

Since China launched its Belt and Road Initiative, countries such as Sri Lanka have been caught in a debt trap, and hit by major crises to their economies and social development, he said.

Tensions in the region have been heightened by Beijing’s ambition to expand its power through military strategies, a clear example of which is China signing a security deal with the Solomon Islands, he added.

The ministry called on countries in the region to recognize that China intends to expand its authoritarian power, Tsuei said, adding that only freedom and democracy can bring stability.

Taiwan has strong relationships with Pacific allies and is committed to continue working with like-minded countries to create a free, open, peaceful and prosperous Pacific region, he said.

In Honiara, Wang commented on reports about a leaked security agreement, which contained a provision that would allow Chinese naval deployments to the Solomon Islands.

“It is not imposed on anyone, nor is it targeted at any third party. There is no intention at all to establish a military base,” Wang told a news conference after meeting with Solomon Islands Minister of Foreign Affairs Jeremiah Manele.

Australia’s former government, toppled in elections last week, had said that any move to create a Chinese military base would amount to crossing a “red line,” without specifying the consequences.

“China’s cooperation with Pacific island countries does not target any country, and should not be interfered or disrupted by any other country,” he said.

Canberra scrambled to counter Wang’s trip by sending Australian Minister of Foreign Affairs Penny Wong （黃英賢） to Fiji to shore up support in the Pacific.

She had been on the job just five days following recent Australian elections and had just returned on Wednesday night from a meeting in Tokyo.

In Fiji, Wong said it was up to each island nation to decide what partnerships they formed and what agreements they signed, but urged them to consider the benefits of sticking with Australia.

“Australia will be a partner that doesn’t come with strings attached nor imposing unsustainable financial burdens,” Wong said. “We are a partner that won’t erode Pacific priorities or Pacific institutions.”