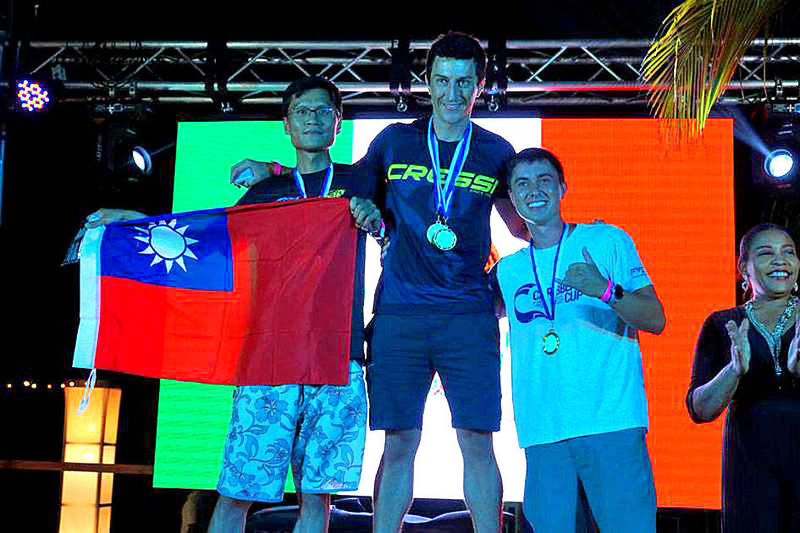 Taiwanese free-diver Huang Ming-chun, left, holds up a national flag after placing second in the constant weight without fins category at the International Association for the Development of Apnea Caribbean Cup on the Honduran island of Roatan this month. Photo: screen grab from Facebook

The Ministry of Foreign Affairs yesterday accused the world’s largest free-diving organization of self-censorship, after it tried to make Taiwanese divers compete under the name “Chinese Taipei.”

The International Association for the Development of Apnea （AIDA）, which organizes free-diving competitions around the world, held this year’s AIDA Caribbean Cup on the Honduran island of Roatan from May 15 through Tuesday.

Huang on Wednesday wrote on Facebook that the two athletes had found that their nationality had been altered from “Taiwan” to “Chinese Taipei” on the schedule published before the event began.

Huang and Lien immediately protested the change to AIDA, which relented only after the two divers threatened to drop out of the competition, he wrote.

The ministry in a statement yesterday said that it “lauds Huang and Lien for their tireless efforts in defending the dignity of the nation and competing brilliantly as athletes of Taiwan.”

“AIDA’s decision to change the name of our country stemmed from political self-censorship. These actions caused offense to the dignity of our country and the rights of our athletes, which the ministry condemns with righteous indignation,” it said.

Taiwan urges the organization to respect the opinions expressed by the overwhelming majority of its members, and the professionalism and integrity of sports, instead of bowing to China’s undue political influence, it added.

“Beijing’s ceaseless campaign to denigrate Taiwanese athletes in international sports events serves only to elicit the distaste of Taiwanese, causes further damage to China’s image and reveals the totalitarian nature of the Chinese Communist Party government,” the statement said.

The organization last year removed Taiwan’s flag from a live broadcast of the AIDA Individual Depth Freediving World Championship in Cyprus in which Taiwanese divers competed, drawing protests from Taipei.