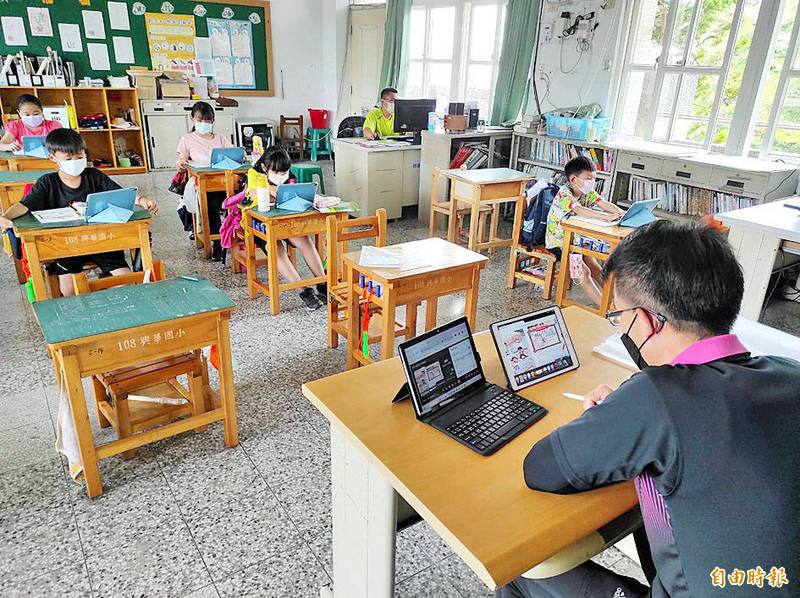 TRAGIC LOSSES: Among yesterday’s 104 reported deaths were a one-year-old girl who died of septic shock and a four-year-old who had developed encephalitis, the CECC said

Every member of a middle or low-income family is to receive five COVID-19 rapid test kits for free, and each resident of a long-term care facility would receive three, Lo told reporters after the Cabinet’s weekly meeting.

Providing the tests would help ease the financial burden of the pandemic for about 800,000 people, Lo cited Premier Su Tseng-chang （蘇貞昌） as telling the Cabinet.

Meanwhile, despite the wide availability of rapid test kits at pharmacies and convenience stores, the government would continue to supply the kits to local governments and schools, Lo said.

Su told the Cabinet that the priority at this stage is to preserve hospitals’ capacity to treat people who have developed moderate or severe symptoms.

After being briefed by the Ministry of Health and Welfare at the meeting, Su told the Cabinet that the domestic outbreak has begun to plateau, with 99.8 percent of confirmed cases being asymptomatic or mild, Lo said.

The nation’s previous daily record for deaths was 76 on Wednesday.

Yesterday’s reported deaths ranged in age from 1 to older than 90, including 97 people who had chronic illnesses or other severe diseases, the CECC said.

Among the fatalities were two girls under the age of 5 — a one-year-old who died of septic shock after contracting COVID-19, and a four-year-old who had developed encephalitis, or inflammation of the brain, and had multiple organ failure, it said.

One of the cases, a seven-year-old boy who has cancer, was hospitalized when he was diagnosed with bacterial pneumonia after testing positive for COVID-19 and is in an intensive care unit, the CECC said.

The CECC has previously urged parents to look out for several symptoms in children that could indicate encephalitis, including a fever of 41°C or higher, loss of consciousness, lethargy, a persistent headache, vomiting, seizures and an unsteady gait.

Parents should immediately take their children to a hospital if they display any of these symptoms.

The CECC has also advised parents to arrange for their children aged 5 or older to be vaccinated against the disease.