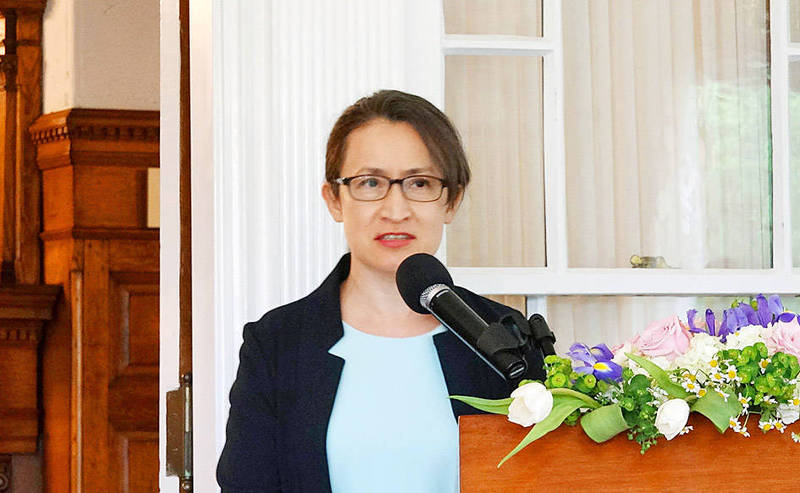 Representative to the US Hsiao Bi-khim speaks to reporters in Washington on Monday. Photo: CNA

Representative to the US Hsiao Bi-khim （蕭美琴） on Monday refrained from directly commenting on US President Joe Biden’s vow to defend Taiwan militarily, instead stressing that Taiwan’s primary focus is on its ability to defend itself.

Asked about Biden’s remarks, Hsiao said that maintaining self-defense capabilities is of great importance to Taiwan.

Maintaining peace and stability across the Taiwan Strait serves the interests of all stakeholders in the region and should be a collective responsibility, she said, adding that Taipei would continue to work with the US and other partners on the issue.

Hsiao thanked Washington for reaffirming its support for Taiwan and its commitment to the nation’s security, while citing US officials as saying that US policy toward Taiwan had not changed.

At a news conference in Tokyo on Monday, when asked: “Are you willing to get involved militarily to defend Taiwan if it comes to that?” Biden answered: “Yes. It’s a commitment we made.”

Biden’s response sent his advisers scrambling to walk back the statement and drew criticism from Beijing.

When asked yesterday, Biden said that the US’ policy of “strategic ambiguity” had not changed.

As for Taiwan’s exclusion from the Indo-Pacific Economic Framework, Hsiao said that Taiwan would continue communicating with the US to find a way to take part.

Experts are divided on the significance of Biden’s apparently off-the-cuff comments, with some saying he was deliberately trying to downplay Washington’s policy of “strategic ambiguity,” while others criticized it as complicating an already unclear position.

Even some who favor jettisoning “strategic ambiguity” have criticized the president, saying that his muddying of the issue risks accelerating China’s desire to act, without carrying the muscle of a formal security guarantee.

Other policy analysts, such as David Sacks, a research fellow at the US Council on Foreign Relations, said that Biden’s extensive foreign policy experience, and the context in which he made the remarks — next to Japanese Prime Minister Fumio Kishida and after the Russian invasion of Ukraine — suggested he did not misspeak.

“I believe that this was not a gaffe,” Sacks said.

Analysts said that repeated similar comments earlier in his administration collectively show that Biden’s personal inclination would be to order some sort of intervention.

“He’s clear in his conviction that the US should respond to Chinese military aggression against Taiwan. He’s ambiguous about what exactly that means and what commitment the US has made to Taiwan’s defense,” said Daniel Russel, the top US diplomat for East Asia during the administration of former US president Barack Obama.

Bonnie Glaser, a Taiwan expert at the German Marshall Fund of the US, said the comments could have the opposite effect of deterring China.

“I think that is the right objective, but I believe the confusion surrounding US policy could undermine deterrence — it could provoke the attack that we seek to deter,” she said.

Republicans, some of whom advocate ending the ambiguity policy altogether, have criticized the repeated apparent haphazard nature of Biden’s remarks on Taiwan.

Dean Cheng （成斌）, a senior research fellow at the Heritage Foundation, said that if Washington were to abandon ambiguity, it would best be done quickly.

“This creates the potential for a ticking clock in Beijing,” he said. “If the Americans are slowly shifting toward strategic clarity, China might want to take action before they’ve made that declaration.”