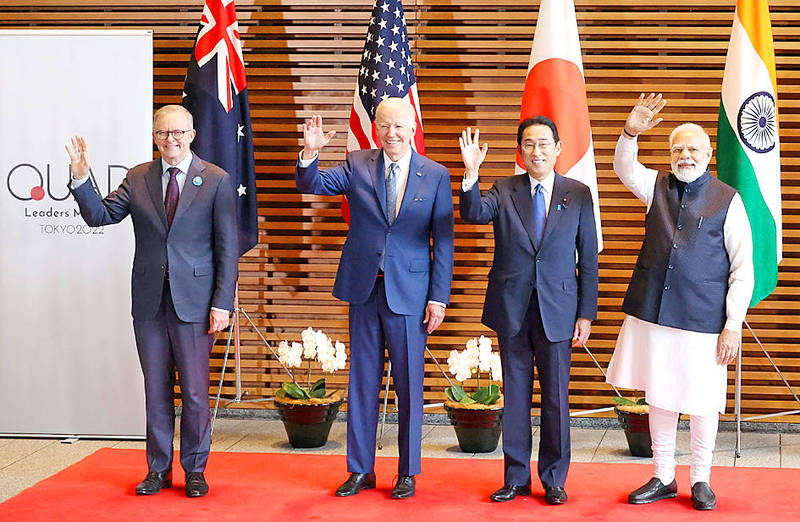 SUBTLE? While Biden said the US policy of ‘strategic ambiguity’ on Taiwan had not changed, the group targeted China and Russia without naming them

Leaders of Australia, India, Japan and the US yesterday warned against attempts to “change the status quo by force,” as concerns grow about whether China could invade Taiwan.

The issue of Taiwan loomed over a leadership meeting in Tokyo of the Quadrilateral Security Dialogue （Quad） nations — the US, Japan, Australia and India — who stressed their determination to ensure a free and open Indo-Pacific region in the face of an increasingly assertive China, although Japanese Prime Minister Fumio Kishida said the group was not targeting any one country.

The four leaders said in a joint statement issued after their talks that they “discussed their respective responses to the conflict in Ukraine and the ongoing tragic humanitarian crisis.”

However, US President Joe Biden Biden’s comments on Taiwan, which was not even on the official agenda at the Quad meeting, were the focus of much of the attention of the delegations and media.

Biden said that there was no change to a US policy of “strategic ambiguity” on Taiwan, a day after he angered China by saying he would be willing to use force to defend the democratic nation.

While Washington is required by law to provide Taiwan with the means to defend itself, it has long followed a policy of “strategic ambiguity” on whether it would intervene militarily to protect it in the event of a Chinese attack — a convention Biden appeared to break on Monday.

Asked if there had been any change to the US policy on Taiwan, Biden yesterday said: “No.”

“The policy has not changed at all. I stated that when I made my statement yesterday,” he said after the talks with his Quad colleagues.

The group’s statement did not mention Russia or China, but listed a range of activities that Beijing has been accused of in the region.

“We strongly oppose any coercive, provocative or unilateral actions that seek to change the status quo and increase tensions in the area, such as the militarization of disputed features, the dangerous use of coast guard vessels and maritime militia, and efforts to disrupt other countries’ offshore resource exploitation activities,” it said.

The four nations unveiled plans to invest at least US$50 billion into regional infrastructure projects over the next five years and a maritime monitoring initiative seen as intended to bolster surveillance of Chinese activities.

The moves come with worries over recent efforts by China to build ties with Pacific nations.

In a nod to those concerns, Kishida urged Quad members to “listen carefully” to regional neighbors, including the Pacific islands.

“Without walking together with countries in the region, the Quad cannot be successful,” he said.

Australia’s newly elected Prime Minister Anthony Albanese also said the bloc needed to “push our shared values in the region at a time when China was clearly seeking to exert more influence.”

As the leaders were meeting, Chinese and Russian fighter jets yesterday carried out joint flights over the Sea of Japan and the East China Sea, Japanese Minister of Defense Nobuo Kishi said.

Tokyo had expressed “grave concerns” to Russia and China over the flights, he said.

An intelligence-gathering aircraft from Russia also flew off northern Hokkaido to the Noto Peninsula in central Japan, Kishi said.