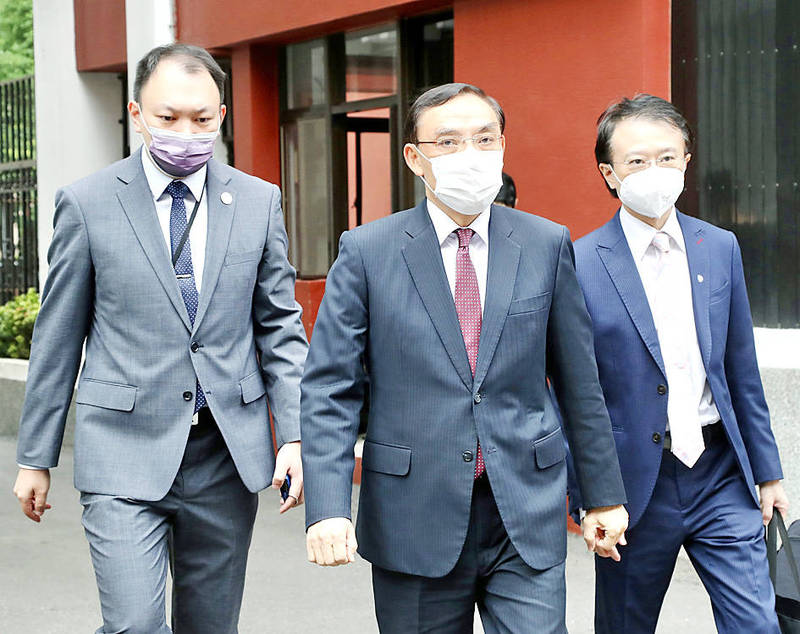 Minister of Justice Tsai Ching-hsiang, center, walks to the legislature in Taipei yesterday to attend a meeting. Photo: CNA

The Ministry of Justice yesterday said that it is considering whether the nation should enact legislation to target hate crimes after a shooting targeting the Irvine Taiwanese Presbyterian Church last week killed one person and injured five.

The suspect is 68-year-old David Weiwen Chou （周文偉）. He was born in Taiwan before emigrating to the US.

He was a member of the National Association for China’s Peaceful Unification, the Orange County Sheriff’s Department said. Police found notes in his car expressing his dislike of Taiwanese and indicating that Taiwan should not be an independent state separate from China.

Chou is believed to have targeted the Irvine congregation as the Presbyterian Church in Taiwan has been supporting Taiwanese independence.

“Many countries have taken similar legal actions to deter hate crimes and hate speech,” Lo said. “The DPP will work with opposition parties to ensure that laws protect people against hate crimes.”

Minister of Justice Tsai Ching-hsiang （蔡清祥） told reporters at the legislature in Taipei that the ministry could begin by reviewing comparable regulations in other nations.

“We will also consult the opinions of legal experts on this matter,” Tsai said. “If the current regulations are deemed to be inadequate to prevent hate crimes, we could consider proposing a new bill.”

Meanwhile, the Irvine Taiwanese Presbyterian Church on Sunday morning held a memorial service for 52-year-old sports physician John Cheng （鄭達志）, who was killed while trying to stop the gunman on May 15.

Representative to the US Hsiao Bi-khim （蕭美琴） attended the service on behalf of President Tsai Ing-wen （蔡英文）.

“Cheng voluntarily took the bullet from the suspect and prevented a massacre with his life... His sacrifice is a testimony of the integrity, kindness and bravery of Taiwanese people and will stay in everyone’s heart,” Hsiao wrote on Facebook.

“The suspect resorted to violence and harmful actions simply because of differences in political ideologies, which in comparison seemed fragile and insignificant,” she wote, adding that she has asked the Ministry of Foreign Affairs and the Taipei Economic and Cultural Representative Office to protect Taiwanese expatriates.