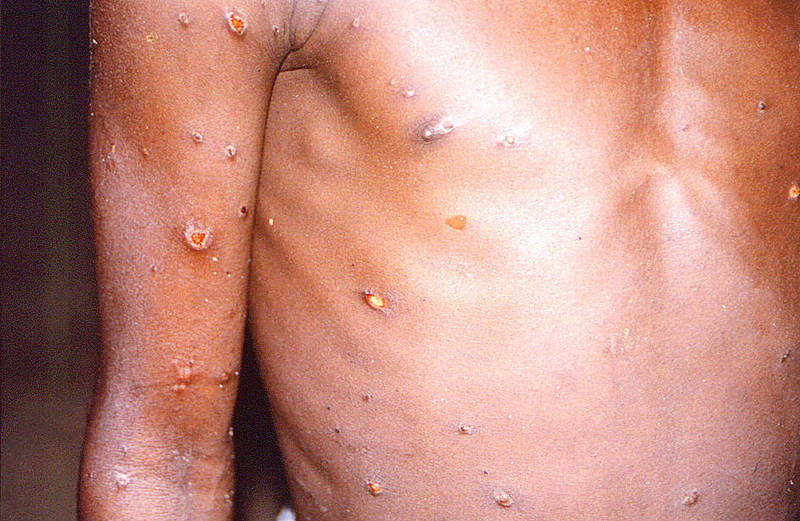 Skin lesions caused by monkeypox cover the arms and torso of a person in an undated image taken during an outbreak of the virus in the Democratic Republic of the Congo from 1996 to 1997. Photo: Reuters

Taiwan is on alert for monkeypox, a rare viral disease that has caused 87 infections in 11 countries over the past three weeks, the Centers for Disease Control （CDC） said on Saturday.

The WHO on Friday convened an emergency session to discuss a sudden outbreak of monkeypox in North America and Europe.

Since the beginning of this month, 87 confirmed cases and 28 possible cases have been identified in 11 countries. The countries with the highest case counts are England with 29 cases, and Portugal and Spain with 23 each.

Monkeypox is a viral zoonotic disease occurring primarily in the tropical rainforest areas of central and western Africa, and is only occasionally exported to other countries, the WHO said.

The disease is transmitted to humans through close contact with an infected person or animal, or with material contaminated with the virus, it said.

However, transmission does not happen easily, requiring contact with lesions, bodily fluids, respiratory droplets or contaminated materials such as bedding, it said.

Citing a WHO fact sheet, CDC Deputy Director-General Chuang Jen-hsiang （莊人祥） said that monkeypox typically presents with a fever, rash and swollen lymph nodes, and could lead to a range of medical complications.

There have been isolated cases of genitalia being infected, he added.

Monkeypox could be fatal for children or those who are immunocompromised, he said.

Travelers who develop monkeypox symptoms upon arriving in Taiwan should immediately inform the airline and CDC personnel at the airport, Chuang said, adding that they should also consult a doctor.