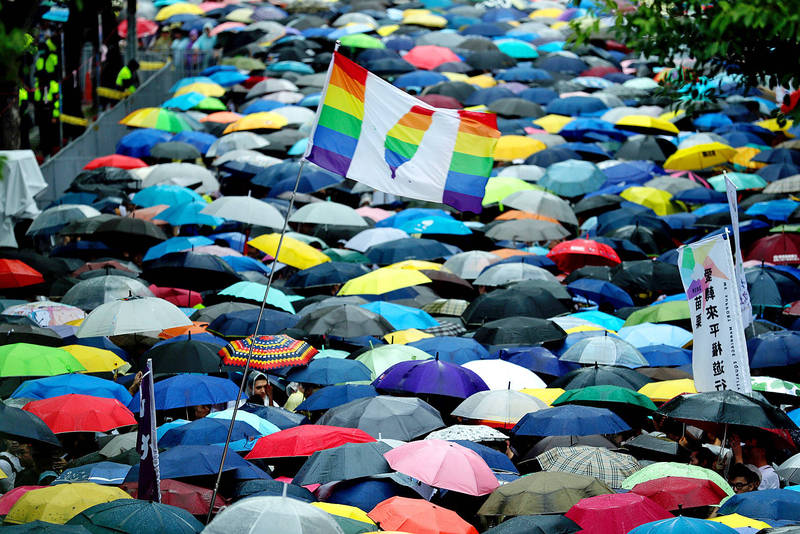 Supporters of same-sex marriage on May 17, 2019, gather outside the Legislative Yuan in Taipei as a bill for marriage equality is debated by lawmakers. Photo: Ritchie B. Tongo, EPA-EFE

CHANGING VIEWS: In four years, there has been a 23.5 percentage point rise in gay marriage backers, and 71% say same-sex couples should be able to adopt

Nearly 61 percent of Taiwanese believe that same-sex couples have the right to marry, up from 37.4 percent in 2018 before the Act for Implementation of Judicial Yuan Interpretation No. 748 （司法院釋字第748號解釋施行法） was enforced, a survey by the Executive Yuan’s Gender Equality Committee found.

Known as the “same-sex marriage act,” it has been in force from May 24, 2019, after the then-Council of Grand Justices in 2017 ruled that provisions on family in the Civil Code were unconstitutional, as they were in violation of people’s right to marry as protected in Article 22 in the Civil Code and people’s right to equality as guaranteed in Article 7 of the Constitution.

As of April 30, there were 7,906 same-sex couples registered in Taiwan, committee data showed.

The telephone survey, conducted from May 4 to May 6, explored changes to public opinions on gender equality, marriage, same-sex marriage and transgender people. It also gauged the approval rating of government measures that were designed to improve gender equality.

Of the respondents, 60.9 percent said that same-sex couples should have the right to legally wed, up from 37.4 percent in 2018 before the act was in force.

Meanwhile, 71 percent of respondents said same-sex couples should have the right to adopt children, while 71.8 percent said that homosexual couples are as capable as their heterosexual counterparts of raising children well.

Of the respondents, 67 percent said that transgender people include both transgender men and transgender women, and they often dress differently from the gender they were born with, up 5 percentage points from last year, the survey found.

Approximately 77 percent of respondents said that transgender people should be free to wear the clothes they are most comfortable with to school or to work, while 89.4 percent said that they would have no trouble having transgender coworkers.

Nearly 73 percent of respondents disagreed with the statement that a man’s job is to earn money and a woman’s job is to take care of her family, while 78.7 percent disagreed that wives should spend more time doing household chores than their husbands.

The survey also found that 84.7 percent of respondents identified with the Executive Yuan’s policy of creating a friendly environment for married couples to raise their children.

Since July last year, the Executive Yuan has increased subsidies for couples undergoing infertility treatment or asking for parental leave. Mothers-to-be now have 14 antenatal visits subsidized by the government, with gestational diabetes mellitus and anemia being added to conditions to be checked for during prenatal visits.

As of March, the number of people applying for subsidies for parental leave was up 32 percent from the same period in 2020, with fathers accounting for 68 percent of applicants.