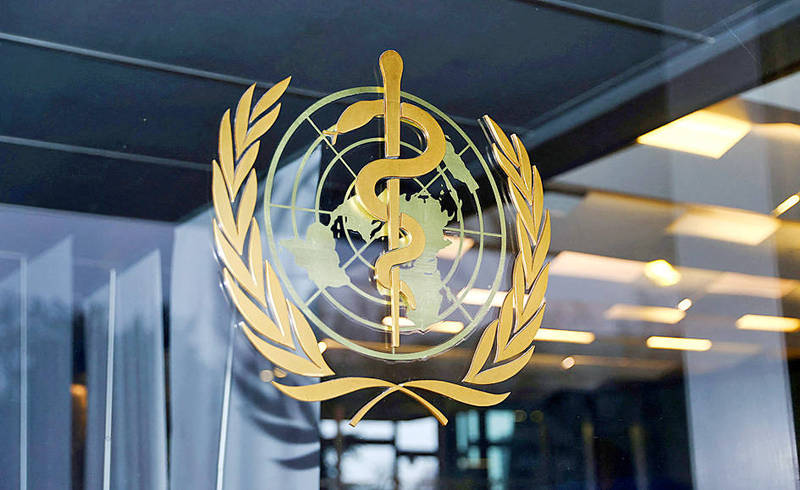 The World Health Organization logo is pictured at the entrance of the WHO building, in Geneva, Switzerland, December 20, 2021. Photo: Reuters

Five foreign missions in Taiwan, including the American Institute in Taiwan and the Japan-Taiwan Exchange Association, yesterday issued a joint statement backing Taiwan’s participation in the World Health Assembly （WHA） as an observer.

As health experts in Taiwan are working diligently to counter growing community COVID-19 transmission, excluding Taiwan from the WHA would hamper those efforts, and compromise global health and safety, the statement said.

Taiwan’s meaningful participation in forums and committees of the WHO would benefit Taiwanese and the world, and the WHA would also “benefit from Taiwan’s world-class expertise,” it said.

However, the support — along with the backing of 71 governments, legislative bodies and parliamentary groups for Taiwan’s participation at WHO events — is not likely to have much effect on Taiwan’s bid to participate in the WHA, which begins today in Geneva, Switzerland, the Ministry of Foreign Affairs said.

Taiwan has not been invited to the annual conference, which runs until Saturday.

Taiwan’s most recent invitation was in 2016.

As has been the case in the past few years, there is expected to be some discussion about Taiwan at the WHA.

Thirteen of Taiwan’s 14 diplomatic allies submitted a proposal to invite Taiwan to participate as an observer, with the issue expected to be addressed today by the WHA’s general committee, said Steven Solomon, the WHO’s principal legal officer.

The committee would make a recommendation to the plenary session on the issue, Solomon said.

A delegation led by Deputy Minister of Health and Welfare Lee Li-feng （李麗芬） departed on Friday for Geneva to campaign for Taiwan’s inclusion in the WHO and its annual assembly.

The delegation would seek bilateral talks with health envoys outside the WHA meetings to explore ways to cooperate on public health, the ministry said in a statement.

She thanked those countries for standing with Taiwan.

“With more support from the international community and more opportunities for international participation, Taiwan will become even more resilient and will be able to contribute even more to freedom and prosperity around the world,” Tsai said.

Deputy Minister of Health and Welfare Lee Li-feng speaks at the ministry in Taipei in an undated photograph. Photo: Yang Cheng-yu, Taipei Times