《TAIPEI TIMES》 US not bound by Beijing’s ‘one China’ principle: State Department spokesman 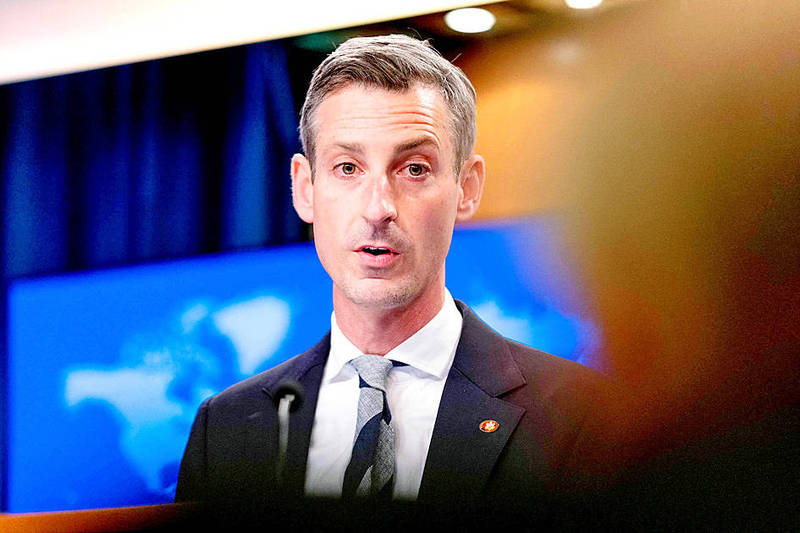 US Department of State spokesman Ned Price speaks at a news conference at the department in Washington on Feb. 28. Photo: AFP

The US Department of State yesterday criticized Beijing over its misrepresentation of the US’ “one China” policy in the latest diplomatic salvo between the two countries over a bid by Taiwan to regain its observer status at the World Health Assembly, the decisionmaking body of the WHO.

“The United States does not subscribe to the PRC’s ‘one China principle’ — we remain committed to our longstanding, bipartisan one China policy, guided by the Taiwan Relations Act, Three Joint Communiques, and Six Assurances,” he added.

Price’s comments came three days after Chinese Ministry of Foreign Affairs spokesman Zhao Lijian （趙立堅） expressed Beijing’s displeasure at Washington’s stance, saying: “The US’ latest modification of the fact sheet is a trick to obscure and hollow out the one China principle.”

“Such political manipulation of the Taiwan question and the attempt to change the status quo across the Taiwan Strait will hurt the US itself,” he told a routine news conference in Beijing.

Zhao was referring to a change to the department’s fact sheet on Taiwan that removed statements that Washington acknowledged Beijing’s “one China” position and did not support Taiwanese independence.

On Sunday last week, US President Joe Biden signed into law bill S.812 to stipulate that Washington must develop a plan to back Taiwan’s bid to take part in the WHO and other international organizations.

The legislation — which passed the US Congress with bipartisan support — lauded Taiwan as “a model contributor to world health, having provided financial and technical assistance to respond to numerous global health challenges.”

Taiwan has yet to receive an invitation to this year’s WHA, which is to be held from today to Saturday next week in Geneva, Switzerland.

The US long maintained that its “one China” policy is distinct from Beijing’s “principle” in that China asserts sovereignty over Taiwan, while Washington takes no position on the issue, David Stilwell, assistant secretary of state for East Asian and Pacific affairs, told a US-based think tank in September 2020.

Washington’s interest is that “the Taiwan question be resolved peacefully, without coercion and in a manner acceptable to the people on both sides of the [Taiwan] Strait,” he said, adding that the US has “a commitment to assist Taiwan in its self-defense” in accordance with the Taiwan Relations Act.