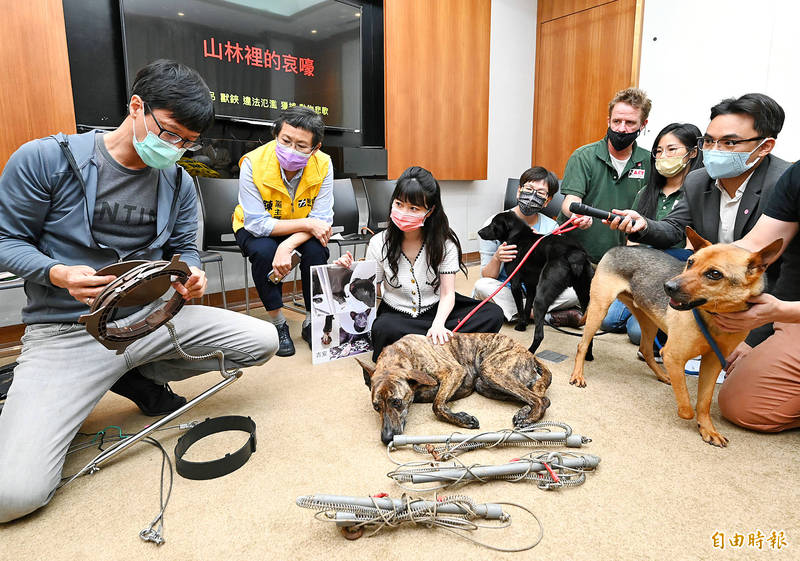 The manufacture and use of animal traps that mutilate their catch should be banned via legal amendments, animal protection groups said yesterday.

Animal Care Trust （ACT） secretary-general Hsu Juo-ching （徐若菁） said the group often found animals bloodied by traps during investigative missions, adding that the number of stray dogs on Yangmingshan （陽明山） with fewer than four functioning legs is proof of the dangers of such traps.

These traps are used to keep animals away from farms, but are ineffective, Hsu said, adding that farmers should adopt more humane methods of protecting their land.

A child could step into a boar trap and be hung from a tree, which would make Taiwanese think twice about such traps, ACT founder Sean McCormack said.

Ho also urged the Executive Yuan to review the Forestry Bureau’s proposed amendments to Article 21 of the Wildlife Conservation Act （野生動物保護法）, which were submitted a year ago and would ban the use of all traps.

New Power Party （NPP） Chairwoman Chen Jiau-hua （陳椒華） said that traps permanently maim animals, and the government should either limit the legal uses of such devices or ban them completely.

Chinese Nationalist Party （KMT） Legislator Hung Meng-kai （洪孟楷） said that if people would not tolerate humans being caught in these types of traps, they have no right to use them on animals.

Either people should be licensed to use these traps, or their use should be reviewed on a case-by-case basis, he said.

The new traps are designed to meet farmers’ needs to deter animals, and old traps should be traded in for the new model, bureau staff said.