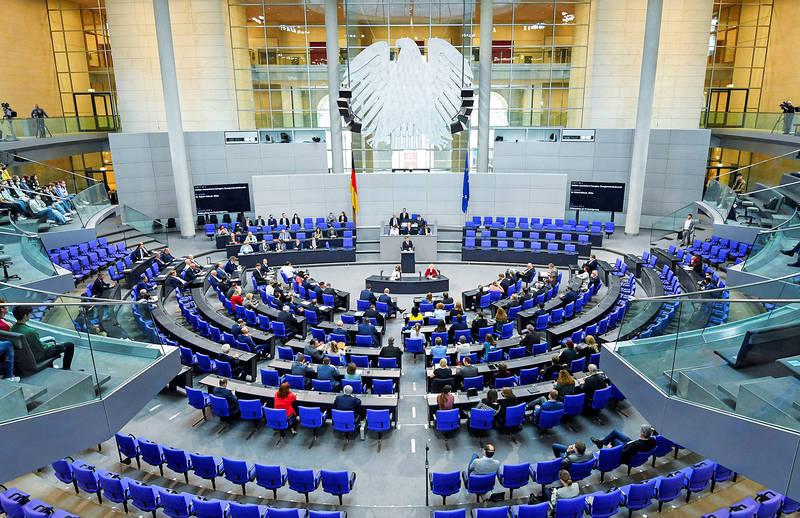 Members of Germany`s federal parliament hold a plenary session at the lower house of parliament, the Bundestag, in Berlin, Germany May 12, 2022. Photo: Reuters

Germany’s Bundestag on Thursday adopted a resolution calling on Berlin to push for Taiwan’s participation in WHO activities, as a delegation of Taiwanese legislators yesterday left for Switzerland to advocate for Taiwan on the sidelines of the World Health Assembly （WHA）.

The resolution, backed by lawmakers across party lines, urges the German government to work within the UN’s health agency to advocate for Taiwan’s participation in the WHA and relevant WHO mechanisms and activities as an observer.

It also calls on the government to report to the Bundestag regularly about its efforts to support Taiwan’s participation in WHO activities.

In Taipei, the Ministry of Foreign Affairs yesterday said it was significant that the Bundestag, backed by four parliamentary groups in support of Taiwan, passed the resolution.

Taiwan looks forward to working with the German government and parliament to deepen bilateral ties and contribute to peace and stability in the Indo-Pacific region, it said in a statement.

Ulrich Lechte, a spokesperson for the Free Democratic Party （FDP） parliamentary group, was cited by German media as saying that Taiwan could play an important role in the WHO and that its exclusion because of Chinese pressure must end.

The FDP was one of the four party caucuses that cosponsored the resolution, along with the Social Democratic Party, CDU/CSU and Bundnis 90/Die Grunen.

Taiwan has yet to receive an invitation to this year’s WHA, which is to be held from Sunday to Saturday next week in Geneva, Switzerland.

A group of cross-party legislators yesterday left for Geneva to voice Taiwan’s hope to participate in international discussions during the 75th WHA.

Wang told a news conference yesterday that she would condemn the WHO for succumbing to Chinese pressure and excluding Taiwan.

“As a sovereign state, Taiwan should be able to participate in global organizations such as the WHO,” she said, adding that during the trip, she would let other democracies know that Taiwan is an important partner and would fight for more opportunities to participate.

Lin, who is a doctor, said that they would watch live broadcasts of the meetings to listen to experts discuss the post-COVID-19 pandemic world.

She said they hoped to visit some local groups, but could not reveal details for fear of Chinese intervention.

The group is also to present Taiwan’s efforts in COVID-19 prevention to Taiwanese expatriates, as many have been asking when policies would be relaxed, she added.