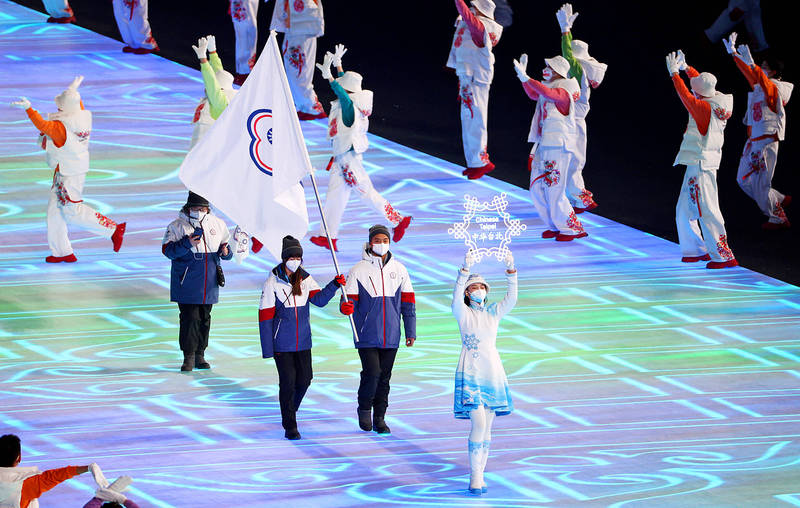 The Ministry of Education yesterday proposed an amendment that would disqualify members of national sports teams and suspend their subsidies for up to five years for actions or speech that tarnish the nation’s honor.

The draft amendment has been dubbed the “Huang Yu-ting （黃郁婷） clause” after the Taiwanese speedskater posted images of herself practicing in China’s national team jersey before the Beijing Winter Olympics in February.

Despite this, she led the nation’s athletes as a flagbearer at the opening ceremony, upsetting many in Taiwan.

This led the ministry to draft an amendment to the Regulations Concerning Audition, Training and Registration of Sports Coaches and Athletes for National Representative Team of International Games （國家代表隊教練與選手選拔培訓及參賽處理辦法）.

If an athlete commits any of the offenses listed in Article 15 of the regulations, their sports association could review the case and determine whether to warn, reprimand or punish the athlete.

A serious offense could mean disqualification, the draft says.

The offenses include using prohibited drugs, disobeying a coach and damaging team harmony.

The draft adds tarnishing the nation’s honor by inappropriate words or deeds as an offense.

Article 15.1 of the draft stipulates that an offender could have their subside reduced or suspended for one to five years, based on the seriousness of the offense.

The proposed amendment would provide a clear legislative basis for punishing or disqualifying athletes of national teams, and help sports associations and other units to maintain discipline, the ministry said.