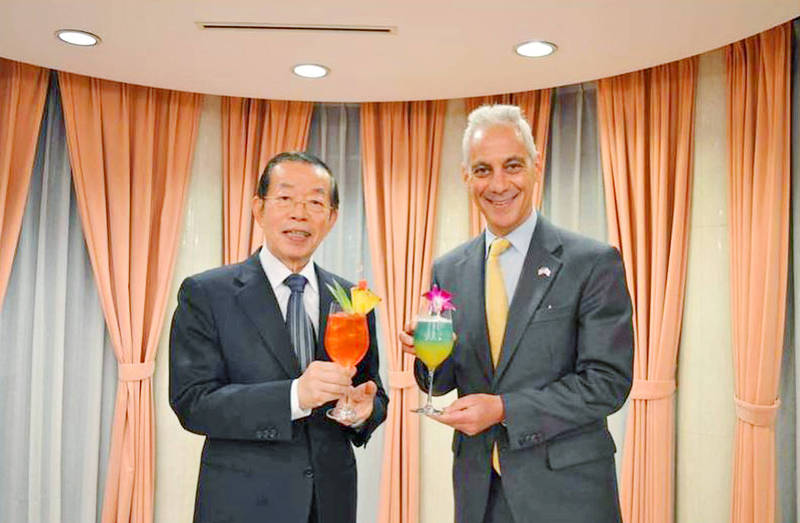 By Lin Tsuei-yi and Liu Tzu-hsuan / Staff reporter in Tokyo, with Staff writer

A new page in the friendship between Taiwan, the US and Japan has begun with a visit by US Ambassador to Japan Rahm Emanuel to the Taipei Economic and Cultural Representative Office in Japan on Wednesday, Representative to Japan Frank Hsieh （謝長廷） has said.

“Ambassador Emanuel is the first US ambassador to Japan to visit our office in the past few years, and he opened a new page for the Taiwan-US-Japan friendship,” Hsieh wrote on Facebook.

“Taiwan, as a member of international democratic society, will continue to work closely with like-minded countries such as the US and Japan,” he added.

Emanuel and Hsieh at Hsieh’s official residence dined together and exchanged opinions on issues of importance to Taiwan and the US, including support for Lithuania and Ukraine, Hsieh said.

Beijing has imposed punitive economic measures against Lithuania for establishing the Taiwanese Representative Office in Lithuania.

It is Taiwan’s first such office in Europe to use “Taiwanese” in its name instead of “Taipei,” as it does in other countries.

The Taipei office welcomed Emanuel with cocktails that were the colors of the Lithuanian and Ukrainian national flags.

The drinks were made from Taiwanese pineapples and Lithuanian lime liqueur, Hsieh said.

Taiwan would support Lithuania and Ukraine as they fight against oppression and authoritarianism, and help safeguard order and prosperity in the Indo-Pacific region, he added.

Emanuel’s visit to the office came ahead of US President Joe Biden’s six-day trip to Asia.

Arriving in Seoul today, Biden is to meet with Japanese Prime Minister Fumio Kishida next week; participate in a summit with the leaders of Japan, India and Australia; and launch the Indo-Pacific Economic Framework, an initiative the US proposed last year to enhance its economic engagement in the region.