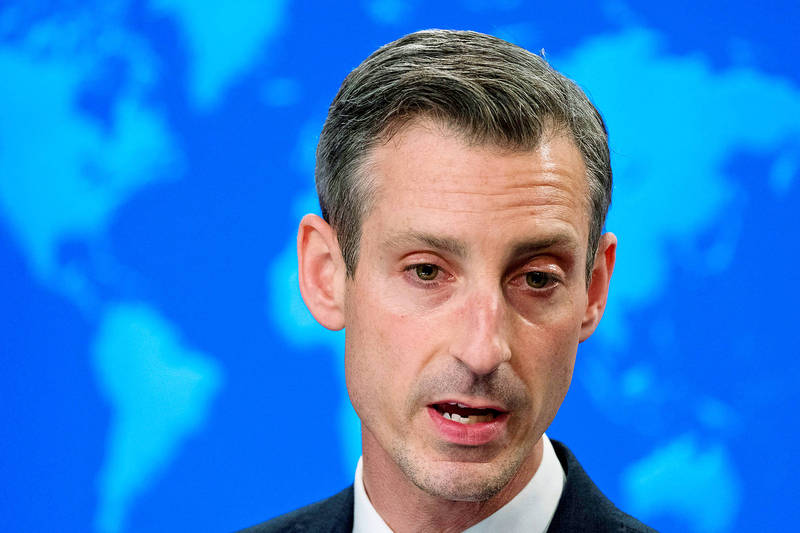 US Department of State spokesman Ned Price speaks during a news conference in Washington on March 10. Photo: Reuters

“We strongly advocate for the WHO to invite Taiwan to participate as an observer and lend its expertise to the solution-seeking discussions at the 75th World Health Assembly,” Price told a news conference.

He was responding to a question about what actions the US government has taken to facilitate the inclusion of Taiwan in the WHA other than making public statements.

The WHA, the decisionmaking body of the WHO, is to convene at the Palace of Nations in Geneva, Switzerland, from Sunday to Saturday next week, after meeting virtually over the past two years due to the COVID-19 pandemic.

Praising Taiwan as “a highly capable, engaged, responsible member of the global health community,” Price said that Taiwan has much to share with the world in different fields, including public health.

“We believe that its [Taiwan’s] significant public health expertise, its technical and technological capabilities, its democratic governments, its resilience in the face of COVID-19 and its robust economy offer considerable resources to inform the WHA’s deliberations,” he said.

There is no reasonable justification to exclude Taiwan from the WHA, Price added.

Thirteen of Taiwan’s diplomatic allies have submitted a proposal to the WHO to invite the nation to participate in the WHA as an observer, the Ministry of Foreign Affairs said.

The proposal would be discussed by the WHA general committee on Sunday. The committee would then refer the case, along with its recommendations, to the plenary session for WHO member states to decide on, the WHO said.

In addition to Taipei’s eight allies in the Caribbean, and Central and South America, which have jointly initiated the proposal, people from Latin American countries that do not have diplomatic ties with Taiwan have also called for Taiwan’s attendance in the WHA, the ministry said.

More than 2,000 individuals and organizations from 20 countries in the region spoke out in favor of Taiwan’s participation, including lawmakers from Brazil and Mexico, as well as people from Argentina, Chile, Ecuador, Colombia, Peru and Costa Rica, it said.

In related news, several Taiwanese groups in the San Francisco Bay Area on Saturday rallied in front of San Francisco City Hall to call for Taiwan’s participation in the WHA.

Holding banners that carried slogans such as “Let Taiwan help” and “WHA for Taiwan,” the participants called for the inclusion of Taiwan in the WHA, saying the nation can contribute to the international community and should have the same rights to healthcare as other countries.

Taiwan had observer status at annual WHA meetings from 2009 to 2016, when relations between Taipei and Beijing were better under the then-ruling Chinese Nationalist Party （KMT）. Since 2017, the WHO has refused to invite Taiwan to attend the assembly due to opposition from China.