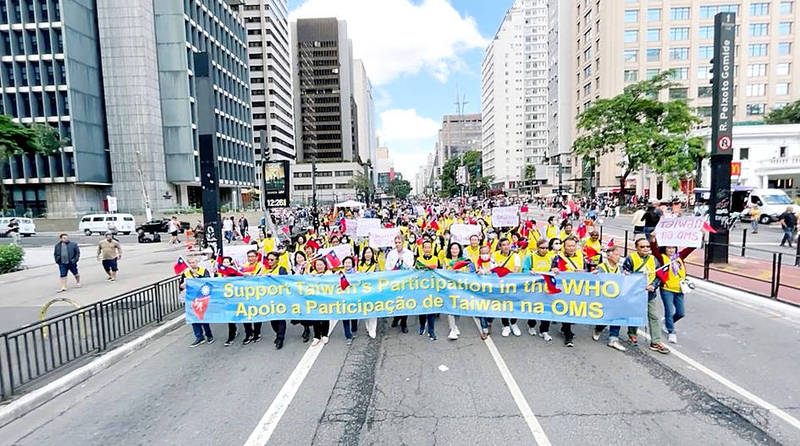 A group of Taiwanese and their supporters hold a banner while marching in downtown Sao Paulo on Sunday, calling on Brazil to support Taiwan’s participation in the World Health Assembly. Photo courtesy of the Taipei Economic and Cultural Office in Sao Paulo

MANY VOICES: The Formosa Club, 94 Mexican lawmakers, 70 Brazilian lawmakers and others signed a letter recommending Taiwan’s inclusion to the WHO director-general

A WHO official on Monday said the organization would begin discussing a motion to restore Taiwan’s observer status in six days’ time, after confirming the receipt of a request from 13 member states to deliberate the matter.

Steven Solomon, the WHO principal legal officer, made the comment at a news briefing ahead of the 75th meeting of the World Health Assembly （WHA）, the organization’s decisionmaking body in Geneva, Switzerland.

The WHA Executive Board would meet in a closed-door session on Sunday evening to advise the member states, which would then meet the next day to determine whether the motion would be entered into the agenda, he said.

Tim Armstrong, director of the Department of Governing Bodies, said the organization was poised to complete an investigation into the origins of the COVID-19 pandemic and that WHO members would be briefed on its findings.

WHO Director-General Tedros Adhanom Ghebreyesus has been paying close attention to the probe, he said.

Armstrong declined to say whether the delegates of China and Russia would be present at the assembly.

The governments of China and Russia had not yet confirmed whether their delegates would be present at the assembly, he said.

In Taipei, Ministry of Foreign Affairs spokeswoman Joanne Ou （歐江安） told a routine news briefing that Taiwan’s bid to take part in the WHO received unprecedented support from the international community this year.

The 13 countries that made a motion for Taiwan to be included are Belize, Eswatini, Guatemala, Haiti, Honduras, the Marshal Islands, Nauru, Palau, Paraguay, Saint Kitts and Nevis, Saint Lucia, Saint Vincent and the Grenadines, and Tuvalu, she said.

The Central American Parliament, the Latin American and Caribbean members of the Formosa Club, 94 Mexican lawmakers, 70 Brazilian lawmakers and other friends have cosigned a letter recommending Taiwan’s inclusion to Ghebreyesus, she said.

The gestures indicate the global community’s growing recognition that Taiwan should be allowed to contribute as a normal part of global health institutions, she said.