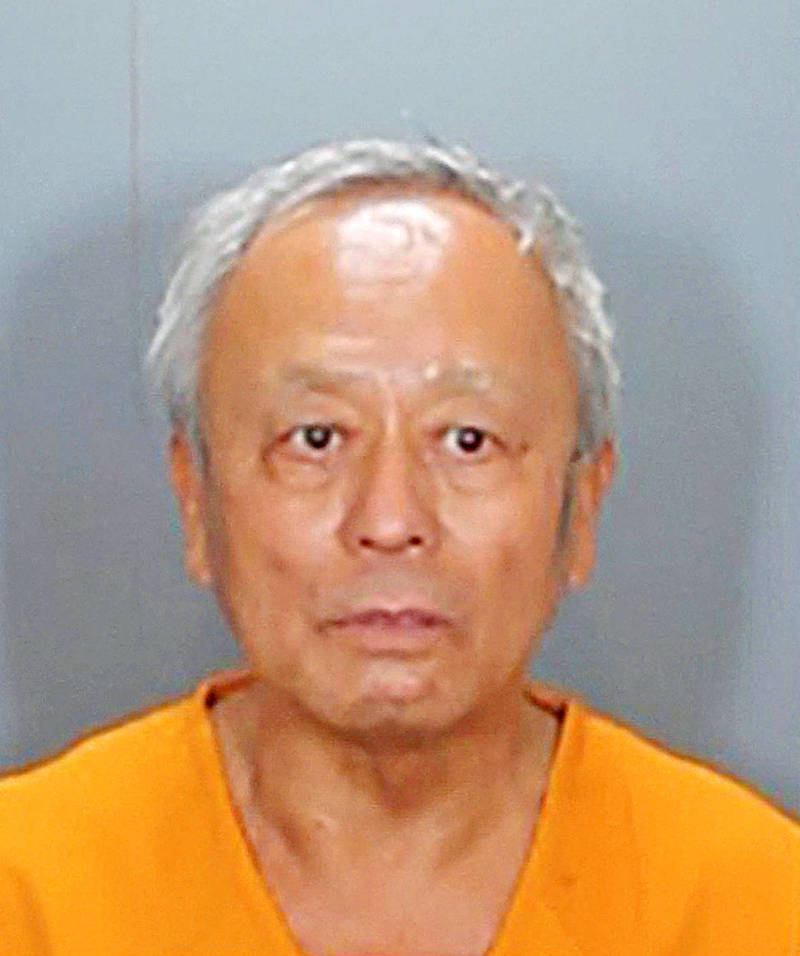 Suspect in the Laguna Woods church shooting David Chou, 68, of Las Vegas is shown in this police booking photo released by the Orange County Sheriff`s Department on May 16, 2022. Photo: Reuters

REACHING OUT: President Tsai expressed condolences to the deceased man’s family and wished a speedy recovery to those who were wounded in the shooting

The Formosan Association for Public Affairs （FAPA） on Monday called on the US to label organizations associated with the suspect in the Irvine Taiwanese Presbyterian Church shooting as domestic terrorists, following accusations that he was a member of a group backing unification with ties to the Chinese government.

David Wenwei Chou （周文偉）, 68, was arrested on Sunday and is being held in lieu of US$1 million bail at the Orange County Intake Release Center over a mass shooting at the California church that left one dead and five wounded.

Local police suspect the shooting was politically motivated after they found notes in Chou’s car indicating that he did not believe Taiwan should be an independent state separate from China.

Internet users have accused Chou of involvement in Las Vegas Chinese for Peaceful Unification, a semi-official organization of the Chinese Communist Party （CCP）, with branches in several countries.

An April 3, 2019, report on the media platform Las Vegas Chinese News Network said that Chou attended the founding ceremony of the group and was an outspoken supporter of former Kaohsiung mayor Han Kuo-yu （韓國瑜） during Han’s presidential campaign.

A picture published with the report showed Chou holding up a banner calling for the “annihilation of separatist demons.”

Group founder Gu Yawen （顧雅文） yesterday told the China Review News Agency that Chou did attend the 2019 founding ceremony, but had seemed “too radical” to her and had not attended group events since the second half of 2019.

FAPA is a “Taiwanese-American organization that promotes freedom, human rights and democracy for the people of Taiwan,” Chien said.

“We strongly condemn this act of cowardice in the strongest terms possible. We, therefore, urge the authorities to prosecute this heinous crime as a politically motivated hate crime, and label any groups he was affiliated with as domestic terrorists,” FAPA said.

Chou was born in Taiwan in 1953 and raised there before emmigrating to the US, Taipei Economic and Cultural Office in Los Angeles Director-General Louis Huang （黃敏境） said on Monday, adding that the man who was killed and the five injured were also Taiwanese-Americans.

The victim has been identified as 52-year-old doctor John Cheng （鄭達志）. He leaves behind a wife and two children.

In Taipei, Presidential Office spokesman Xavier Chang （張惇涵） said President Tsai Ing-wen （蔡英文） condemns all forms of violence, and expressed her condolences to Cheng’s family and hoped for the fast recovery of the wounded.

Chang said the president had asked Representative to the US Hsiao Bi-khim （蕭美琴）, who is based in Washington, to visit California soon to express the government’s willingness to offer assistance to the families of the victims.

A photograph of John Cheng, a 52-year-old doctor who was killed in Sunday’s shooting at Geneva Presbyterian Church, is displayed outside his office in Aliso Viejo, California, on Monday. Photo: AP

Flowers and notes are seen at a makeshift memorial outside the Geneva Presbyterian Church in Laguna Woods, California, on Monday. Photo: AFP