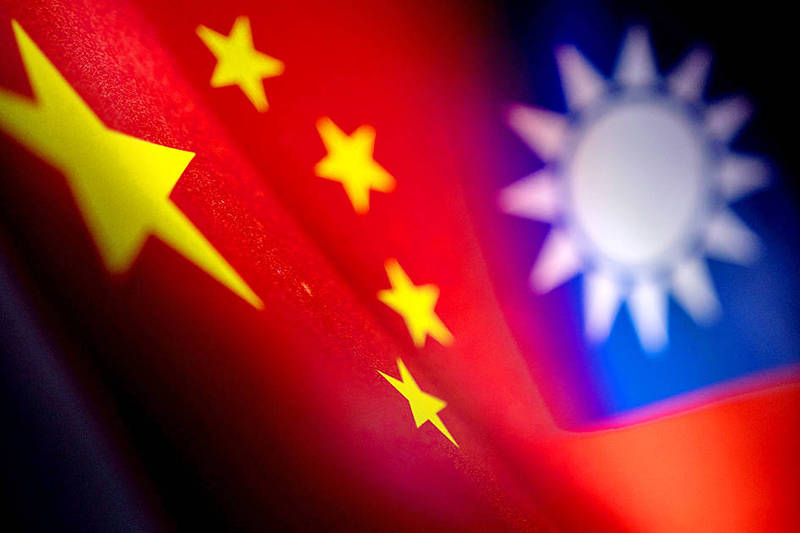 Flags of Taiwan, right, and China are pictured on April 28. Photo: Reuters

INFLUENCERS: The Chinese Communist Party uses social media to paint itself in a positive light, while promoting historical ties between Taiwan and China

China has trained local Internet celebrities to help it spread propaganda as part of its “united front” efforts against Taiwan, the source said, adding that Beijing was also using TikTok, a Pinterest-like app called Xiaohongshu （also known as Little Red Book） and other social media to influence young Taiwanese.

Citing the Mainland Affairs Council, the source said that officials had warned people cooperating with China that they could face fines or other punishments.

Stipulations under the Act Governing Relations Between the People of the Taiwan Area and the Mainland Area （臺灣地區與大陸地區人民關係條例） and the Anti-Infiltration Act （反滲透法） make it illegal to help China spread propaganda, they said.

Article 33-1 of the Act Governing Relations Between the People of the Taiwan Area and the Mainland Area states that it is illegal to engage in “any form of cooperative activity with the agencies, institutions or organizations of the Mainland Area which are political parties, the military, the administration or of any political nature.”

The Chinese Communist Party typically uses social media to paint a positive image of itself, and to spread ideas about historical connections between Taiwan and China, the source said.

“It is all with the intent of changing young people’s perceptions of China and of the cross-strait relationship,” the source said.

China also hosts events that it invites Taiwanese youth to attend, including an annual “cross-strait youth development forum,” which was held last week in Hangzhou, China, the source said, adding that Taiwanese Internet celebrities have attended remotely over videoconference in the past few years due to the COVID-19 pandemic.

“If the content shared by these Taiwanese on behalf of China contains false information, that could also be punishable under measures that target fake news and disinformation,” the source said, citing statements by Democratic Progressive Party legislators.

Legislators face challenges addressing the issue, as they must also protect free speech in designing legislation, but the Anti-Infiltration Act would likely be amended to better protect against such efforts by China, the source said.

The National Communications Commission is also seeking to tackle the issue through a draft act on digital communications, the source said, adding that the Mainland Affairs Council is also working with the Ministry of Education to educate students about the risks of using TikTok, Xiaohongshu and other Chinese apps.