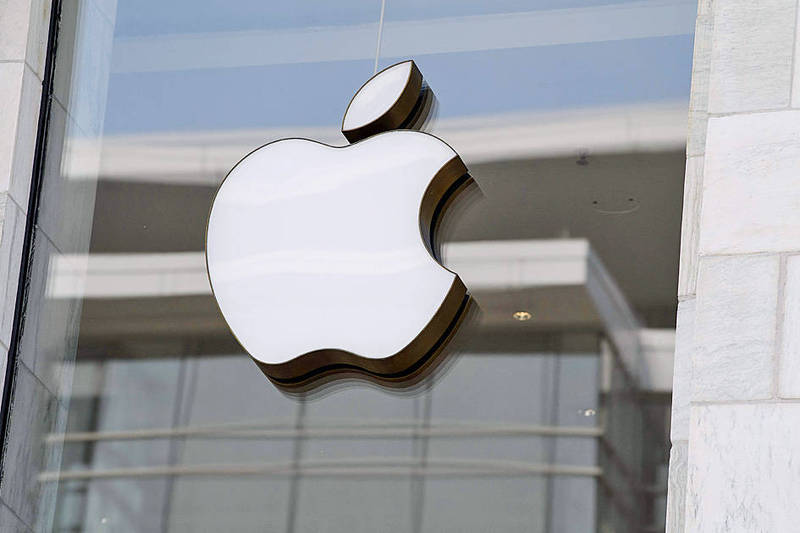 The Apple logo is seen at the entrance of an Apple store in Washington on Sept. 14 last year. Photo: AFP

material SHORTAGE: Even as workers are about to return, Quanta lacks operating supplies, while Pegatron reported its lowest revenues in 11 quarters, the companies said

Quanta Computer Inc （廣達電腦）, which assembles MacBooks, expects a 20 percent quarterly fall in notebook shipments and a squeeze on margins this quarter due to the lockdown, a company representative said on Friday during an earnings call.

The impact from supply chain disruptions could last until the end of the year, she said.

The company’s Shanghai factory has been operating under tight restrictions since the middle of last month, with video surfacing earlier this month of workers charging isolation barriers and fighting guards to break out.

“Even if we have the manpower, we still need the materials,” Quanta chief financial officer Elton Yang （楊俊烈） said during the call.

The company reported net profit of NT$6.75 billion （US$226.46 million） for the first quarter, down 4.8 percent year-on-year, with earnings per share falling to the lowest in seven quarters at NT$1.75.

Pegatron Corp （和碩）, which assembles iPhones and notebook computers, also slashed its outlook for notebook shipments to a decline of between 5 percent and 10 percent from the first three months, compared with previous guidance for a rise of 25 percent to 30 percent, the company said on Thursday.

Pegatron reported a 64.33 percent year-on-year decline in net profit to NT$1.67 billion in the first quarter, the lowest level in about 11 quarters, with earnings per share of NT$0.62.

China’s “zero COVID” strategy — which relies on closed borders, quarantines, lockdowns and mass testing — is upending its giant manufacturing sector, even as most of the world is relaxing pandemic measures.

The weight of the strategy has been particularly felt in the eastern region around Shanghai, which is struggling to contain an outbreak.

After reporting first-quarter results ahead of estimates, Inventec Corp （英業達） president Maurice Wu （巫永財） said on Friday that second-quarter performance is expected to be flat, but it would still be a double-digit jump from the previous year.

Inventec’s net profit for last quarter reached NT$1.49 billion, up 30 percent from a year earlier, with earnings per share of NT$0.41.

In server motherboards, however, which the company makes at its Shanghai plant, Inventec is now three months late on orders, he said.

“We will need to work overtime to get back on schedule,” Wu said. “We hope to deliver our overdue orders to our clients by late May or June.”

While factories have been given special allowances to reopen under strict guidelines and systems, snarls in the supply chain — from a shortage of delivery drivers to a lack of materials — continue to disrupt local operators and global giants, including Tesla Inc and Sony Group Corp.

Apple said that supply constraints in China would cost US$4 billion to US$8 billion in revenue during the current quarter.

The city also plans to announce a third “white list” of more than 820 import and export companies that can resume operations, a city official said.