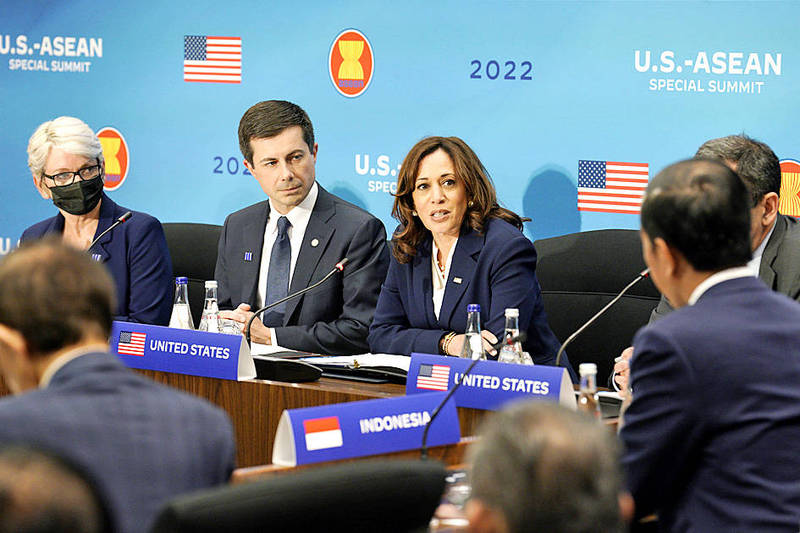 US Vice President Kamala Harris, third left, speaks at a meeting with US Secretary of Transportation Pete Buttigieg, second left, during the US-ASEAN Special Summit at the US Department of State in Washington on Friday. Photo: Bloomberg

US President Joe Biden on Friday said a first summit in Washington with ASEAN leaders marked the launch of a “new era” in the relationship between the US and the 10-nation bloc.

On Ukraine they reaffirmed “respect for sovereignty, political independence, and territorial integrity,” wording that a regional expert said went further than past ASEAN statements.

The statement did not condemn Russia by name for its Feb. 24 invasion of Ukraine.

The summit marked the first time ASEAN leaders gathered as a group in Washington, and their first meeting hosted by a US president since 2016.

Biden’s administration hopes the effort will show that the US remains focused on the Indo-Pacific and the long-term challenge of China, which it views as its main competitor, despite Russia’s invasion of Ukraine.

He was also hoping to persuade ASEAN countries to toughen their stance on Russia’s invasion.

Biden told the ASEAN leaders that “a great deal of history of our world in the next 50 years is going to be written in the ASEAN countries, and our relationship with you is the future, in the coming years and decades.”

US Vice President Kamala Harris said the US would remain in Southeast Asia for “generations,” while stressing the need to maintain freedom of the seas, which the US says is challenged by China.

“The United States and ASEAN have shared a vision for this region, and together we will guard against threats to international rules and norms,” Harris said.

Neither she nor Biden mentioned China by name.

Harris said Washington would continue to respond with ASEAN to the threat of COVID-19, having already donated more than 115 million vaccine doses to the region, adding that both sides need to show collective ambition on climate change, accelerate the transition to clean energy and meet infrastructure needs sustainably.

Biden also announced the nomination of US National Security Council Chief of Staff and Executive Secretary Yohannes Abraham to be ambassador to ASEAN, filling a post vacant since the start of then-US president Donald Trump’s administration in 2017.