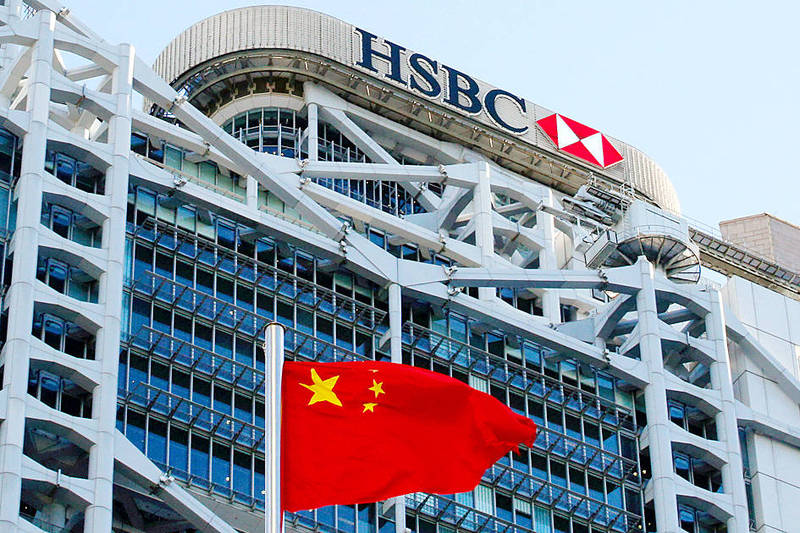 A Chinese national flag flies in front of the HSBC headquarters in Hong Kong on July 28, 2020. Photo: Reuters

SHEEP’S CLOTHING: There have been far fewer requests to invest in Taiwan from China than Hong Kong, implying that Chinese are registering their firms in the territory

A report from the Legislative Yuan’s Organic Laws and Statutes Bureau said that the policy regarding Hong Kong and Macau as “foreign countries” separate from China should be reviewed to protect national security.

Under the government’s standing policy and the Act Governing Relations with Hong Kong and Macau （香港澳門關係條例）, the people of both territories are treated as foreigners when investing, working or studying in Taiwan, and are not under the jurisdiction of the Act Governing Relations Between the People of the Taiwan Area and the Mainland Area （臺灣地區與大陸地區人民關係條例）, the report said.

Hong Kong investors are given far more options for investment, and the review of their applications is far more relaxed than for Chinese, the report said.

For the whole of last year, there were 49 applications from China to invest in Taiwan, while there were 691 from Hong Kong, an indicator that Chinese are exploiting a legal loophole by registering their companies in Hong Kong, the report said.

Since China imposed its National Security Law on Hong Kong, the “one China, two systems” concept has undergone drastic changes in Hong Kong and Macau, as the Chinese Communist Party （CCP） has been pushing policies to expedite the integration of Hong Kong and Macau with China.

The report cited a fundamental change in Hong Kong’s population dynamics, as 1.25 million Chinese have immigrated to Hong Kong in the past 25 years.

That does not include those Chinese who have immigrated because of Hong Kong’s project to attract Chinese talent, the report said, adding that the population of Chinese in Hong Kong comprises a significant portion of the territory’s population of 7 million people.

The shifting population dynamics, along with a shift in Chinese policies toward the governing of Hong Kong and Macau, has created doubts regarding the autonomy both territories have, and the government should reconsider its policies for them, it said.

Moreover, the government must consider the national security implications of such policies, as Taiwan, which is reliant on its high-tech industry, can ill afford to have Chinese investors siphon off its talent pool using Hong Kong companies as a front, the report said.