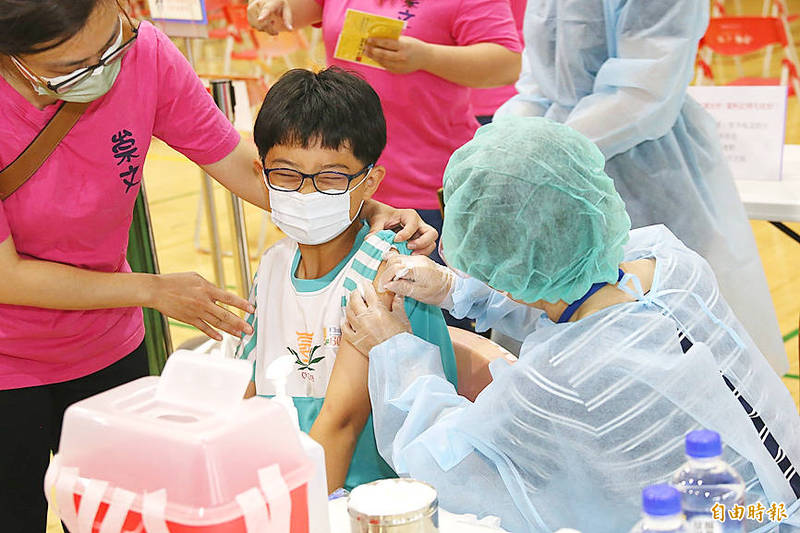 EASY TESTING: The president called for the establishment of large PCR testing stations in New Taipei City, Taipei, Keelung and Taoyuan to ease the burden on local hospitals

By Lee Hsin-fang and Liu Tzu-hsuan / Staff reporter, with staff writer and CNA

People aged 65 or older, and those over 60 who are immunocompromised, will be eligible for a fourth dose of a COVID-19 vaccine beginning next week at the earliest, the Central Epidemic Command Center （CECC） said yesterday, as COVID-19 cases topped 60,000 for a second day.

People eligible for a fourth shot must wait at least five months after receiving their third dose to receive the next booster, said Centers for Disease Control Deputy Director-General Chuang Jen-hsiang （莊人祥）, who is the CECC’s spokesman, adding that the center would soon announce a vaccination schedule.

The decision to start administering another round of COVID-19 boosters was made during an Advisory Committee on Immunization Practices meeting at the end of last month, the center said.

To date, at least 85.65 percent of the population has received at least one dose of a vaccine, 80.69 percent have received two and 62.5 percent three, CECC data showed.

Starting today, those who test positive for COVID-19 in a rapid antigen test while following a “3+4” quarantine plan for close contacts of a confirmed case or while in quarantine after arriving in Taiwan can have friends or relatives take their test kits to be confirmed in a medical consultation on their behalf, the CECC said.

Previously, they were required to schedule a virtual doctor’s appointment or take a polymerase chain reaction test （PCR） to confirm that they had COVID-19.

Minister of Health and Welfare Chen Shih-chung （陳時中）, who heads the center, said that the CECC had received complaints from people in quarantine over not understanding the process of booking a virtual doctor’s appointment.

Those who are unable to book a virtual consultation can have friends and relatives bring their rapid test results and the person’s National Health Insurance card to a clinic or the designated medical facility in charge of their home care for an assessment, he added.

To ease the burden on hospitals and clinics so they can focus on people with severe symptoms of COVID-19, President Tsai Ing-wen （蔡英文） yesterday called for the establishment of large PCR testing stations in New Taipei City, Taipei, Keelung and Taoyuan, Presidential Office spokesman Xavier Chang （張惇涵） said.

People who test positive at the stations can also apply for medical prescriptions at the site, he said.

In addition to asking the CECC to continue simplifying procedures for people to see doctors quickly and obtain medication, Tsai at a disease-prevention meeting at the Presidential Office said the government should continue purchasing COVID-19 medications and rapid test kits to ensure a steady supply.

COVID-19 cases yesterday exceeded 60,000 for the second consecutive day, with the CECC reporting 65,011 new cases and 41 deaths from the disease.

The new cases consisted of 64,972 local and 39 imported infections, it said.

All but one of the people who died had underlying medical conditions, including cardiovascular disease, diabetes, chronic lung disease, chronic kidney disease, stroke and cancer, it said.