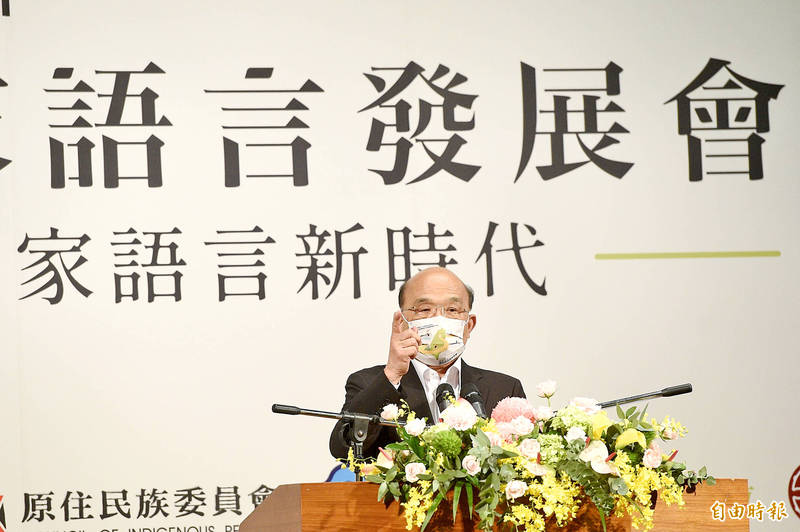 Premier Su Tseng-chang （蘇貞昌） yesterday presented an outline to promote Taiwan’s native languages, as well as English, including a five-year budget of NT$30 billion （US$1.01 billion）.

The new language policy has the dual purpose of recognizing Taiwan’s official languages and improving the English-language abilities of Taiwanese, Su told the weekly Cabinet meeting in Taipei.

“We are not pushing a bilingual policy [of Mandarin and English], nor will English be one of the nation’s official languages,” he said.

Groups last month said that English was being elevated at the expense of Taiwan’s diverse languages, which are in severe decline.

“During authoritarian rule under the one-party state dictatorship, Taiwan’s native languages were suppressed, but they survived,” Su said.

“However, even with the suppression removed, the native languages are facing rapid erosion while the cultures they come from are gradually dying out.”

“We are at a critical time for the endangered native languages of Taiwan,” he said.

“The government is determined to pool resources to revitalize and sustain our nation’s native languages for future generations,” he said.

The plan is to focus on programs to record the words of elders and native speakers, compile a database of Taiwan’s languages and regional vernacular, organize speech contests and cultural activities, and sponsor training for teachers and parents to promote the use of such languages at home, Su said.

“We will endeavored to preserve and revitalize Taiwan’s native languages,” Su said.

Students will have English-language classes each week, the Ministry of Culture said.

However, the government would not mandate that schools teach mathematics, history and other core courses in English, the ministry said.

The ministry has said Taiwan Sign Language, as well as Mandarin, Hokkien, and the indigenous Hakka and Mindong languages, are at risk of disappearing.

In a statement issued after the Cabinet meeting, the ministry said that a coordinated effort by government agencies, rather than the government’s previous piecemeal approach, is needed to preserve Taiwan’s languages.