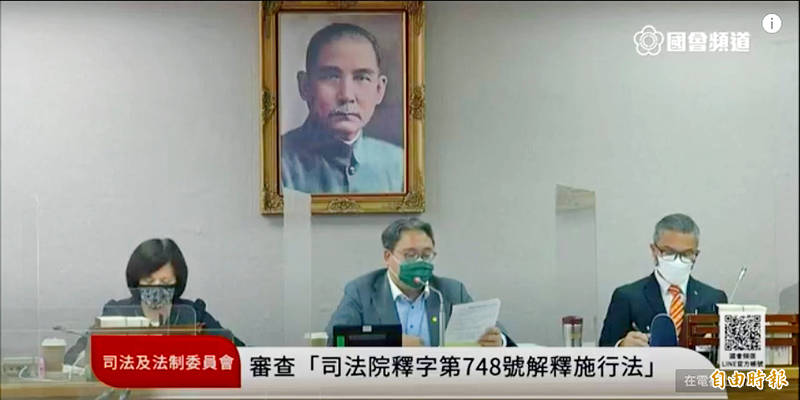 Members of the legislature’s Judiciary and Organic Laws and Statues Committee conduct a preliminary review of the Act for the Judicial Yuan’s Implementation of Constitutional Interpretation No. 748 at the Legislative Yuan in Taipei yesterday. Photo: Hsieh Chun-lin, Taipei Times

THREE YEARS ON: Deputy Minister of Justice Chen Ming-tang said Taiwan has marriage equality, but ‘it is time for Taiwan to take care of the next generation’

An amendment to grant same-sex couples the right to jointly adopt children passed a preliminary review yesterday at the legislature’s Judiciary and Organic Laws and Statutes Committee, bringing the law one step closer to closing an oversight criticized by LGBTQ+ and children’s advocates since the passage of same-sex marriage in 2019.

The amendment to Article 20 of the Act for the Judicial Yuan’s Implementation of Constitutional Interpretation No. 748 （司法院釋字第七四八號解釋施行法） is to enter cross-party negotiations.

The amendment aims to grant same-sex couples the right to adopt jointly and for a partner to legally adopt their spouse’s adopted child, bringing their rights in line with those afforded to different-sex couples under the Civil Code.

The act as it stands only allows for a same-sex partner to adopt their spouse’s biological child.

Since the law was passed in May 2019, 7,757 couples have registered marriages.

“At that time, we were the first in Asia” to legalize marriage equality, Democratic Progressive Party Legislator Cheng Yun-peng （鄭運鵬） said. “Three years later, we are still the only ones. Now it is time for Taiwan to take care of the next generation.”

Deputy Minister of Justice Chen Ming-tang （陳明堂） told legislators at the committee meeting that the authors of the 2019 law were facing a few points of contention.

First was a debate over using a dedicated law rather than changing the Civil Code, as LGBTQ+ advocates said it would mark them as different, Chen said.

They also had to use the term “permanent union for the purpose of living a common life” rather than “marriage” to appease opponents and align the law with the referendum results from the year before, he said.

At the time, there were also reservations over the hotly debated issue of adoption rights, he said, adding that the original wording was not meant to restrict same-sex couples.

However, after three years, it is time to legally protect the children of same-sex couples, he said.

The law as it was originally written denies parents certain crucial rights, he said.

All of these circumstances have arisen since 2019, Chen said, adding that the government has the obligation of protecting these rights.

Given that adoption is a contractual agreement, Cheng said that the court has the right to revoke a person’s parental rights if it deems them unsuitable, regardless of gender.

The Ministry of Justice in its report to the committee cited a government-commissioned survey showing that attitudes toward LGBTQ+ issues have improved since the law was passed.

Attitudes toward adoption rights have also improved, with 53.8 of respondents approving in 2018 and 67.2 percent last year.

Asked whether same-sex couples could raise a child as well as different-sex couples, 56.2 percent of respondents agreed in 2018, while 72.2 percent agreed last year.