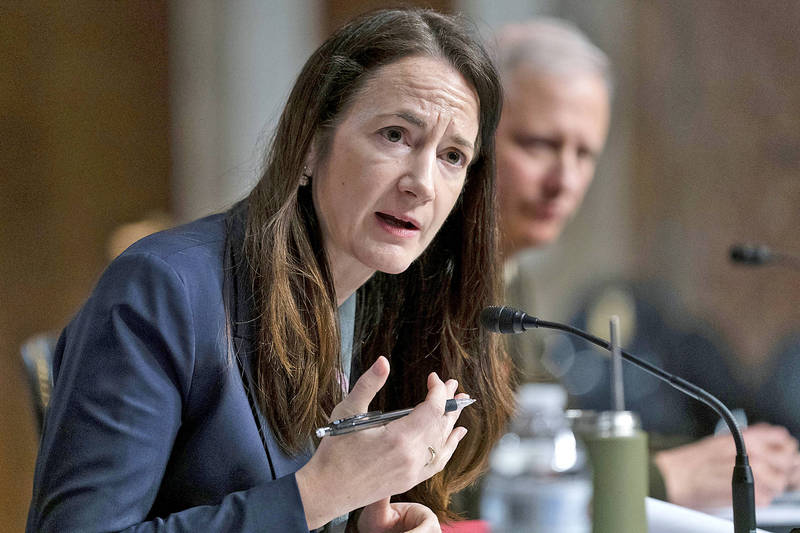 US Director of National Intelligence Avril Haines testifies during a US Senate Committee on Armed Services hearing on Capitol Hill in Washington on Tuesday. Photo: AP

EIGHT-YEAR WINDOW: Avril Haines said that Beijing is closely watching the Russian invasion of Ukraine, although Moscow’s actions have not sped up Beijing’s timeline

The threat posed by China to Taiwan until 2030 is “critical,” US Director of National Intelligence Avril Haines said on Tuesday while testifying on worldwide threats at a hearing of the US Senate Committee on Armed Services.

“I think it’s fair to say that it’s critical, or acute,” Haines said when asked by US Senator Josh Hawley if she viewed the threat facing Taiwan to be acute from now until 2030.

“It’s our view that they [China] are working hard to effectively put themselves into a position in which their military is capable of taking Taiwan over our intervention,” she said, without elaborating.

Beijing is closely watching the Russian invasion of Ukraine, which started more than two months ago, but it is unclear what lessons China might have learned since then, she said.

Whatever those lessons might be could affect China’s plan regarding Taiwan, but Russia’s invasion had not accelerated Beijing’s timeline, Haines said, citing US intelligence assessments.

US Defense Intelligence Agency Director Scott Berrier said he was “not seeing anything that would tell me that they’re [China] thinking about trying to take advantage of this time.”

“We’re not really sure what lessons [Chinese President] Xi Jinping （習近平） is taking away from this conflict right now,” Berrier said. “We would hope that they would be the right ones.”

Hopefully, Xi would realize that an invasion of Taiwan would be difficult, dangerous and risky, Berrier added later.

Berrier and Haines said that China would rather pursue its unification goal through peaceful means than resorting to force, but Taiwan still needs to be prepared to defend itself militarily.

The US should engage with Taiwan’s military and leadership “to help them understand what this conflict has been about, what lessons they can learn,” Berrier said, referring to Ukraine’s resistance against Russian attacks.

The US should also help Taiwan grasp “where they should be focusing their dollars on defense and their training,” he said.

In related news, a US Navy warship sailed through the Taiwan Strait on Tuesday to show Washington’s “commitment to a free and open Indo-Pacific” region, the US Pacific Command’s 7th Fleet said in a statement.

The vessel, identified as the Ticonderoga-class guided-missile cruiser USS Port Royal （CG-73）, made the transit as part of a “routine operation and was done in accordance with international laws,” the fleet said.

The 7th Fleet said that the ship transited through a corridor in the Taiwan Strait that is “beyond the territorial sea of any coastal state.”

The Ministry of National Defense later confirmed the transit, saying in a statement that the military was on top of the situation as the US warship sailed south through the Taiwan Strait and it did not see any irregularities.

On the same day of the transit, a Chinese attack helicopter briefly crossed the median line of the waterway, the ministry said.

The WZ-10 helicopter crossed the median line in a southern part of the Taiwan Strait on a mission with two KA-28 anti-submarine helicopters, it said.