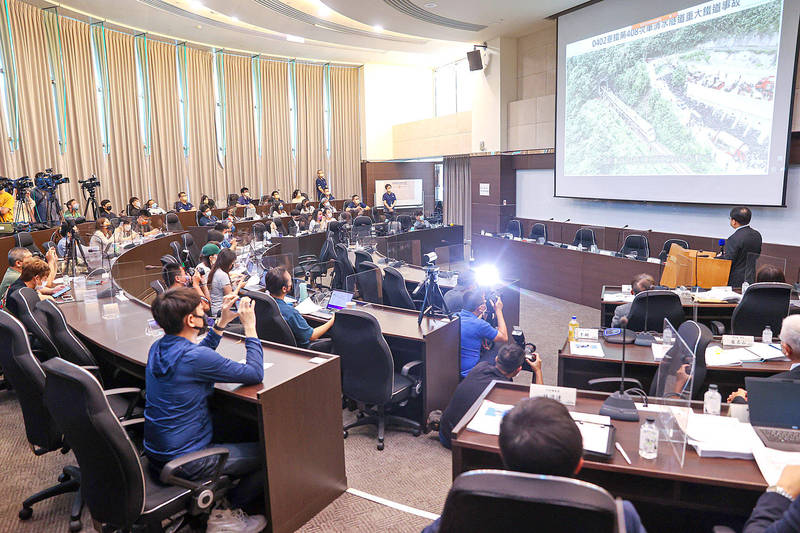 DANGEROUS: The number of standing passengers injured in a train crash last year was seven times greater than the number of seated passengers, the report said

A final report on the deadly Taroko Express crash last year by the Taiwan Transportation Safety Board yesterday recommended limiting standing passengers who are at greater risk of being injured in an accident.

The number of standing passengers injured when Taroko Express No. 408 crashed on April 2 last year was seven times greater than the number of seated passengers who were injured, the board said.

Based on the findings, Lin suggested that the Railway Bureau formulate crash worthiness specifications for trains and define impact buffer zones of train cars to better inform passengers.

He also suggested that the bureau restrict or warn passengers not to stand in the aisles for too long, and to reconsider the sale of standing tickets.

“We saw a positive correlation between the distribution area of the victims and the degree of damage to the train in each area, and a much higher rate of death and serious injury among those standing,” he said.

The numbers do not include the two deceased train drivers, as well as four deceased passengers who might have been seated or standing at the time, he said.

Overall, 71.42 percent of the deceased and injured had been standing at the time of the crash, he said.

“This tells us that it is considerably more dangerous to be standing on a train when an accident occurs,” he said. “The EU does not allow people to stand for long periods near doors or entrance areas of train cars, which are crumple zones.”

The investigators also found the train’s safety equipment to be inadequate, he said.

“Trains lack handheld loudspeakers and defibrillators, and once the train driver leaves the train, the emergency intercoms — which connect directly to the driver’s cab — become useless,” he said. “Also, the emergency ventilation system can only be turned on manually by the conductor.”