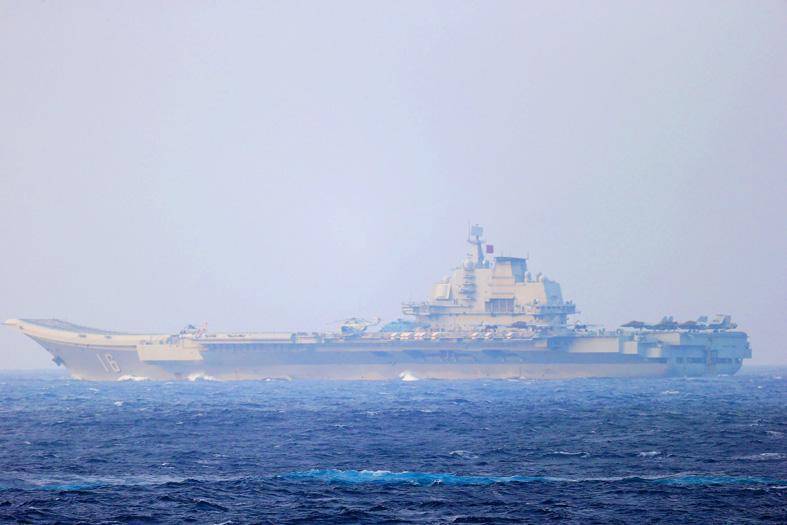 Chinese aircraft carrier the Liaoning sail through the Miyako Strait near Okinawa on its way to the Pacific in a handout photo taken by the Japan Self-Defense Forces and released by the Joint Staff Office of the Japanese Ministry of Defense on April 7th, 2021. Photo: Reuters

INDIRECT MESSAGE? Chinese planes might have entered Taiwan’s ADIZ to take part in drills with a carrier group that was about 500km off the east coast, an analyst said

The Chinese military yesterday said it had conducted live-fire drills in waters and airspace off Taiwan’s eastern and southwestern coasts from Friday to Sunday to test and upgrade its joint combat capabilities.

Over the past few days, authorities in Taiwan and Japan have observed deployments of Chinese planes and ships near Taiwan from a PLA carrier group of five destroyers, a frigate and a resupply ship led by the Liaoning aircraft carrier.

The Japanese Ministry of Defense first announced on Monday last week that the Liaoning and seven escort vessels had left the East China Sea and passed between Japan’s Okinawa and Miyako islands before entering the Pacific Ocean.

From Tuesday last week to Saturday, fighter jets and helicopters were seen several times taking off and landing on the Liaoning, said the Japan Self-Defense Forces, which sent the JS Izumo helicopter carrier to monitor the movements.

In Taipei, the Ministry of National Defense said on its Web site on Sunday that Chinese Y-8 anti-submarine aircraft had on four consecutive days entered the southern and southeastern parts of Taiwan’s air defense identification zone （ADIZ）.

On Friday, 18 Chinese military planes flew into the southwestern and southeastern parts of Taiwan’s ADIZ, the largest intrusion by Chinese military aircraft so far this month, the ministry said.

National Defense and Security Research analyst Su Tzu-yun （蘇紫雲） said that the Y-8 anti-submarine aircraft might have entered Taiwan’s southeastern ADIZ to conduct drills with the carrier group, which was in waters about 500km off Taiwan’s eastern coast.

The drills might have been an indirect message from Beijing of its unhappiness over the “internationalization” of the Taiwan issue, Su added.