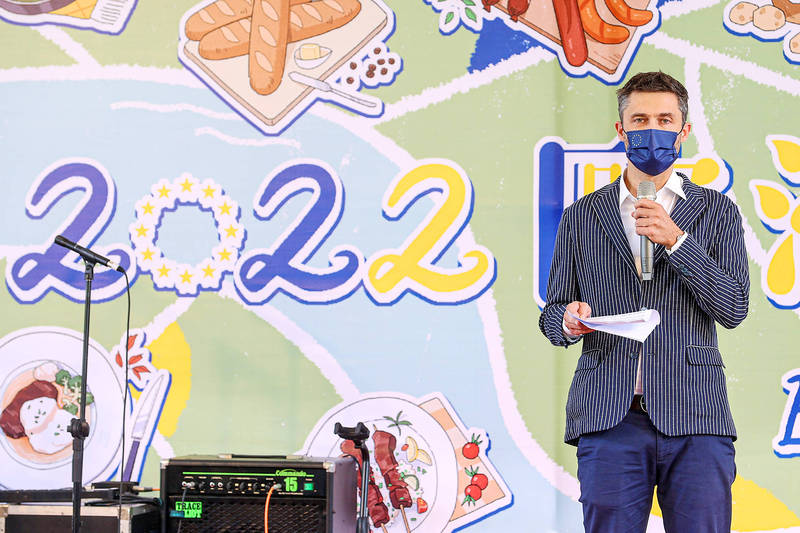 STANDING TOGETHER: Taiwan’s support of Ukraine and its neighbors since the start of Russia’s invasion has been ‘very remarkable,’ the Italian representative said

The annual Europe Festival to celebrate Europe Day opened yesterday in Taipei with a focus on showing solidarity with Ukrainians.

“Today, more than ever, is the time to appreciate the values that formed the European Union,” such as equality, freedom, human dignity and solidarity, European Economic and Trade Office in Taiwan （EETO） Director Filip Grzegorzewski said at the opening ceremony.

The EU condemns in the strongest possible terms the unprovoked, unjustified invasion of Ukraine by Russia, Grzegorzewski said, adding that the aggression has killed thousands and displaced millions.

“We stand firmly by Ukraine and its people, and [as we] celebrate today the Europe Day, we cannot do it without thinking of and showing our solidarity with Ukraine,” he said.

He also thanked Taiwan for joining forces with the international community to provide aid and support to Ukraine, while imposing sanctions on Russia and its ally Belarus.

Taiwan’s efforts showed that it “stand[s] together with the Europeans, with Ukraine” in the face of the ongoing crisis, he added.

Italian Representative to Taiwan Davide Giglio shared similar views with the Central News Agency, saying that Taiwan’s response to the Russian invasion of Ukraine that started on Feb. 24 has been in line with that of Europe.

“We share the same type of condemnation of the Russian activities,” Giglio said, adding that Taiwanese support of Ukraine and its neighboring countries was “very remarkable,” considering how far away the war is from Taiwan.

Taiwan and the EU share fundamental values and have been going in the same direction democratically for a long time, Giglio said, adding that the current crisis might enable both sides to find an opportunity to “get closer.”

Minister of Foreign Affairs Joseph Wu （吳釗燮） said at the opening that Taiwan “stands ready to scale up all cooperation and explore new opportunities” with Europe.

“Despite all the hardship and challenge we face in the coming years, I have faith that we will all emerge stronger and more united than ever,” he said.

The two-day festival, held on a swathe of grass on the northern side of Huashan 1914 Creative Park, features European food, products and cultural activities that allow visitors to experience Europe without traveling abroad, the EETO said.

The proceeds from the booth would be donated to a humanitarian fund launched by the UN, the EETO said.

Europe Day, which is observed on May 9 every year, marks the anniversary of a European peace project proposed by former French prime minister Robert Schuman on May 9, 1950. The plan led to what is now the EU, the EETO said.