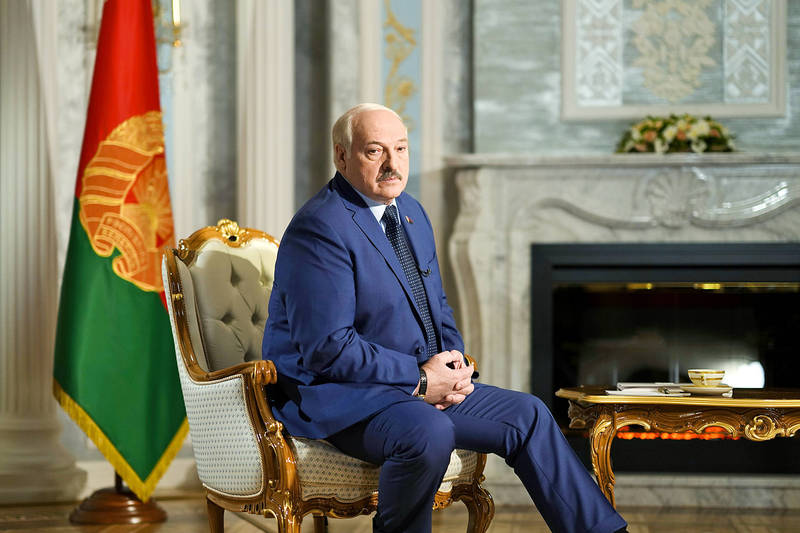 Belarusian President Alexander Lukashenko listens to questions during an interview at the Independence Palace in Minsk on Thursday.  Photo: AP

‘THE RIGHT THING’: The move is largely symbolic, as Taiwan has minimal levels of trade with Belarus, which has denied taking part in Russia’s invasion of Ukraine

The government on Friday imposed controls on exports of technology to Belarus, saying that Minsk was directly involved in Russia’s invasion of Ukraine.

The restrictions — which Taipei also imposed on Russia last month — bar Taiwanese companies from exporting a long list of tech products to Belarus without special permission.

The move is largely symbolic given Taiwan’s minimal levels of direct trade with Belarus or Russia.

However, Ukraine’s plight has won broad public sympathy in Taiwan due to what many people view as the parallels between what is happening in the European country and what could happen if China were to use force to bring the nation under Chinese control.

The export control list includes equipment for making semiconductors, an industry in which Taiwan is a world leader, as well as lasers and navigation systems. It is meant to prevent technology from being using for military purposes.

The Ministry of Economic Affairs said the move was made “in view of Belarus’ active participation in Russia’s invasion of Ukraine” — an accusation that Belarus has denied.

Minister of Foreign Affairs Joseph Wu （吳釗燮） yesterday said at the opening of a Europe Festival in Taipei that the sanctions against Belarus showed Taiwan’s solidarity with Europe.

“I think this is the right thing to do... We are very glad to be able to do this, together with Europe,” Wu said, although he had acknowledged that bilateral trade with Belarus was not considerable.

“As a force for good, Taiwan will continue to work back to back with Europe, and all democratic partners in solidarity to protect the values and way of life we share and cherish,” Wu said.

Belarusian President Alexander Lukashenko in March said that his country’s armed forces were not taking part and would not contribute to what Russia calls a “special military operation” in Ukraine.

The Ministry of Foreign Affairs said in a separate statement that the US, the EU, the UK and Japan had all already announced sanctions on Belarus.