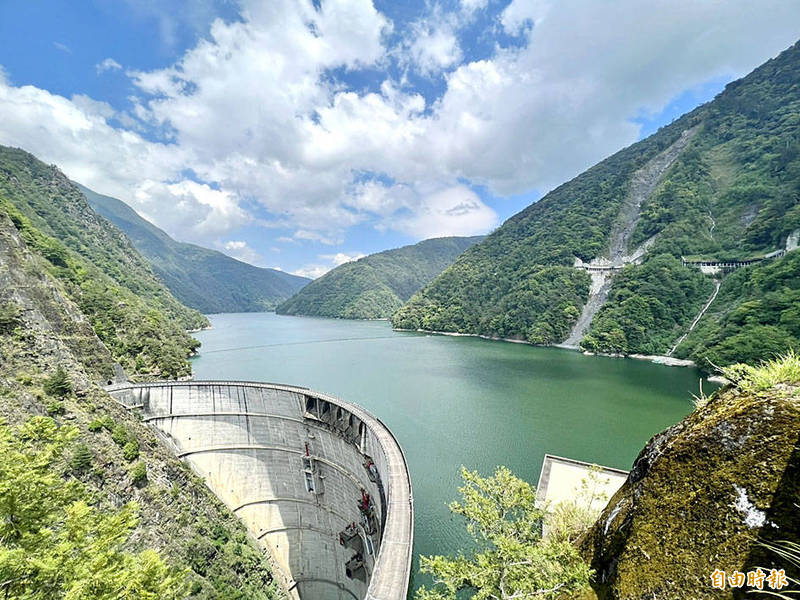 Eutrophication is caused by an excess of nutrients, which results in a buildup of plant life that limits the benefits of light and oxygen in water.

Mesotrophic water contains a moderate amount of nutrients, encouraging the growth of submerged aquatic plants, while oligotrophic water is clear and of higher quality.

The EPA regularly analyzes water samples from reservoirs, including 20 major reservoirs and six minor ones on Taiwan proper, and 26 on outlying islands. It monitors the water quality of key reservoirs monthly and general reservoirs quarterly.

Among the six minor reservoirs on Taiwan proper, Dapu Reservoir （大埔水庫） in Hsinchu County, Toushe Reservoir （頭社水庫） in Nantou County and Agongdian Reservoir （阿公店水庫） in Kaohsiung were eutrophic, while the other three were mesotrophic, the report said.

All of the reservoirs on the outlying islands were affected by eutrophication, it said.

If there is not much rain, an excess of nutrients such as nitrogen and phosphorous stimulates algal growth, a phenomenon called “algal bloom,” Hou said.

Eutrophication causes concern, as algae can produce toxins that might be harmful to human health, although algae can be completely removed in water treatment processes, he said.

However, eutrophication makes tap water more difficult to process, especially when it comes to deciding how much algae remover is needed, he said.

Due to eutrophication, water purification plants would add more chemicals to water to remove the algae, Nien said.

EPA Office of Water Quality Protection head Yen Hsu-ming （顏旭明） said that eutrophication is evaluated using the Carlson trophic state index, which is determined by the level of suspended chlorophyll-a solids and the transparency of the water.

If the chlorophyll-a levels are too high, it can be inferred that eutrophication is due to an algal bloom, which can be resolved by removing the algae, Yen said.

However, if the eutrophication is caused by “reservoir killer” microcystis, ingesting the water might cause acute gastroenteritis, dermatitis, hepatitis or cancer, he said.

However, the possibility of contracting such diseases from drinking tap water is low and the EPA checks water quality regularly to ensure it is safe, he said.

The EPA tests water before and after it is treated, he said.

Lin Yi-pin （林逸彬）, a professor at NTU’s Graduate Institute of Environmental Engineering, said that people should not worry too much about water quality, as it is carefully monitored at multiple stages.