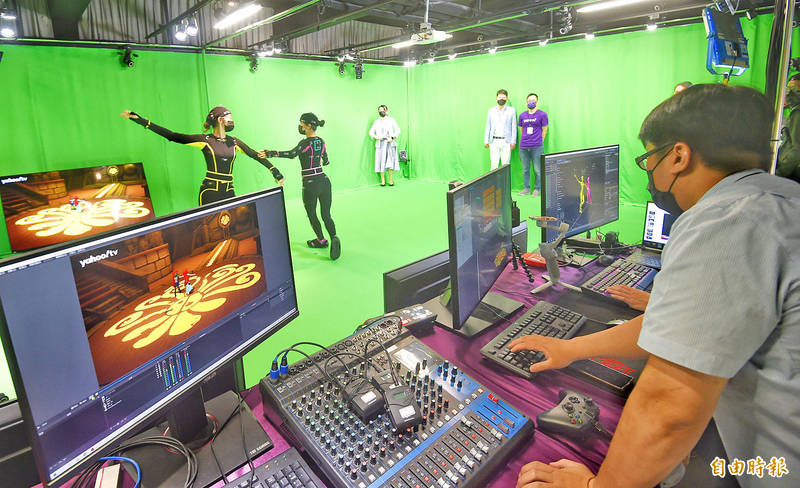 People participate in a motion capture session in Taipei yesterday at the opening of the Meta XR Hub Taiwan, jointly launched by Meta Platforms, the parent company of Facebook, and the Institute for Information Industry. Photo: Fang Pin-chao, Taipei Times

“Today marks another milestone of Meta’s establishment in Taiwan, and [the company] will work with Taiwanese partners to create the next generation of social technology,” Chu said.

Taiwan is to play a huge part in the metaverse, Meta chief product officer Chris Cox said in a video presentation at the event.

Taiwan’s ability to build hardware and establish public infrastructure is unparalleled, and it has many outstanding creators, artists, researchers and developers engaged in the development of technologies and applications, he said.

As augmented reality and virtual reality flourish, Taiwan would not only become an important stronghold for the metaverse team, but also a key hub for driving global innovations, he added.

American Institute in Taiwan Director Sandra Oudkirk said that by establishing the XR Hub in Taipei, “Meta is demonstrating its belief that Taiwan will play a key role in the rapidly evolving metaverse industry.”

“Taiwan is a central node of the globe’s semiconductor ecosystem and a cutting-edge pioneer on emerging technologies like hardware-software integration, chipsets, processors, 5G and Wi-Fi 6,” Oudkirk said.

Taiwanese developers and artists have also won global awards for creating virtual reality content, she said, and “these are all essential elements in the metaverse.”

The XR hub in Taiwan is to collaborate with Taiwantrade to establish a platform in which people can digitally engage with each other, so that trade exhibitions would not be just limited to a physical or online event.

President Tsai Ing-wen （蔡英文） said at the ceremony that the government would work hard to build a better environment for the development of the digital economy and expressed hope that Meta can continue to expand its investments in Taiwan.

Tsai said that the metaverse taking root in Taiwan would help drive local communication technology development and innovative applications, and prompt more companies to accelerate their participation in the metaverse.