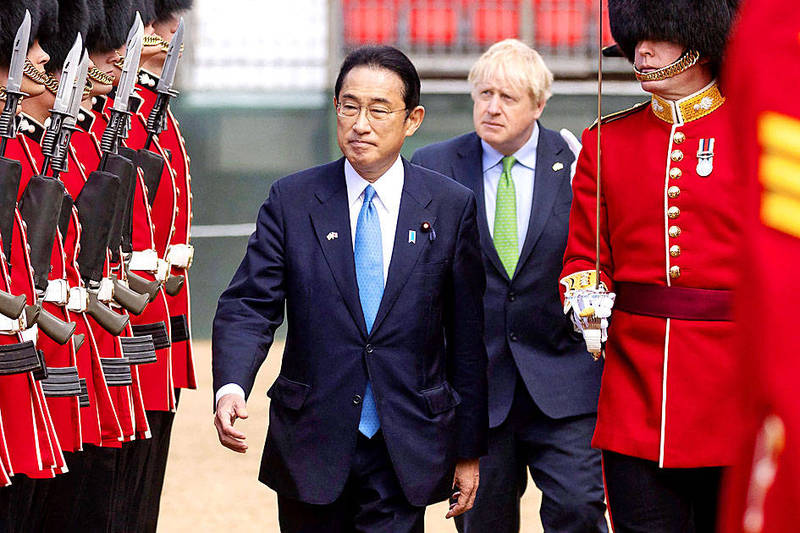 ‘UNWAVERING COMMITMENT’: The Japanese and US defense heads said they would enhance cooperation to prevent any change by force of the ‘status quo’

Japanese Prime Minister Fumio Kishida on Thursday warned that the invasion of Ukraine could be replicated in East Asia if leading powers do not respond as one, saying that peace and stability in the Taiwan Strait must be maintained.

Kishida, speaking in London through a translator after a meeting with British Prime Minister Boris Johnson, said now was the time for G7 nations to solidify their unity.

“Collaboration among countries sharing universal values becomes ever more vital,” he said. “We must collaborate with our allies and like-minded countries, and never tolerate a unilateral attempt to change the status quo by the use of force in the Indo-Pacific [region], especially in East Asia.”

“Ukraine may be East Asia tomorrow,” he added.

“Peace and stability in the Taiwan Strait is critical not only for Japan’s security, but also for the stability of international society,” Kishida said. “Japan maintains its position to expect a peaceful resolution through dialogue to issues surrounding Taiwan, and the situation will be watched carefully from that perspective.”

In Taipei, Ministry of Foreign Affairs spokeswoman Joanne Ou （歐江安） yesterday thanked Kishida for his comments, saying they “not only reflect the aspirations of democratic countries, but also win the recognition and approval of the international community.”

Chinese Ministry of Foreign Affairs spokesman Zhao Lijian （趙立堅） said that Japan was exaggerating a perceived threat from Beijing as an excuse to boost its military might.

“If Japan really wants peace and stability in East Asia, it should immediately stop provoking confrontation between big powers and do more to help increase the trust between regional countries, and promote regional peace and stability,” Zhao told a regular news briefing in Beijing.

During the London meeting, Johnson announced that the militaries of the UK and Japan would “work more closely together’” under a defense deal.

Kishida also announced new sanctions, including an asset freeze on 140 Russians and the expansion of an export ban to include Russian military firms.

Kishida’s Liberal Democratic Party has also proposed a substantial increase in defense spending — possibly to an amount on par with 2 percent of GDP, up from 1 percent — and the development of the capacity to attack missile-launching sites in an enemy’s territory.

In Washington, Japanese Minister of Defense Nobuo Kishi and US Secretary of Defense Lloyd Austin on Wednesday vowed to defend the rules-based international order in a meeting at the Pentagon.

The US and Japan would enhance cooperation to oppose China’s expansionism in the East and South China seas to prevent any change by force to the “status quo” in the region, they said.

The countries are to counter threats emanating from Russia’s invasion of Ukraine and North Korea’s nuclear tests, they added.

Tokyo is to revise its National Security Strategy to allow the possession of counterstrike capabilities against long-range missiles before the end of the year, Kishi said.

Austin was quoted by the Pentagon as saying that the US reaffirms “unwavering commitment to the defense of Japan to include our extended deterrence commitments using our full range of conventional and nuclear capabilities.”

Additional reporting by Lin Tsuei-yi and Jonathan Chin, with CNA, AP and the Guardian

Japanese Minister of Defense Nobuo Kishi, front left, speaks during a meeting with US Secretary of Defense Lloyd Austin, right, at the Pentagon in Arlington, Virginia, on Wednesday. Photo: EPA-EFE