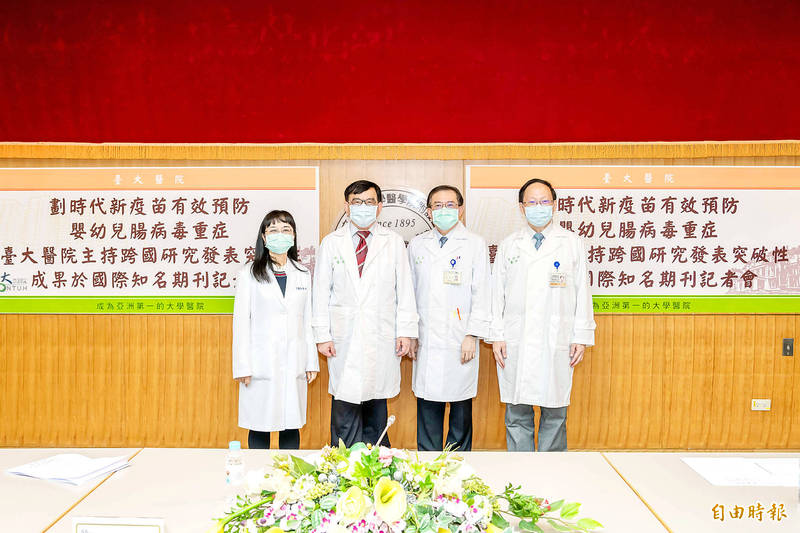 The study has been published in the Lancet medical journal, he said, adding that the vaccine might be approved by the Food and Drug Administration by the end of the year.

With an efficacy rate of 96.8 percent, the vaccine is a significant improvement over one developed in China that can only be used on infants over six months of age, Huang said.

A large outbreak of enterovirus in 1998 struck Taiwan, resulting in tens of thousands of children being infected. There were 400 severe cases and 78 deaths.

The results showed that 100 percent of the participants who received Taiwan’s enterovirus A71 vaccine did not develop an infection.

In comparison, 22 participants in the placebo groups developed an enterovirus infection; 11 with EV71 B5 subgenotype and 10 with EV71 C4 subgenotype, showing that the vaccine developed using the B4 subgenotype offered good protection.

None of the participants had adverse reactions after receiving the vaccine, which can also be administered with other children’s vaccines, the study showed.

NTU Hospital pediatrician Chang Luan-yin （張鑾英）, who participated in the research, said that although the vaccine is highly effective, full vaccination coverage is likely needed to prevent the virus from spreading.

The team is to track whether antibodies remain in vaccinated participants when they reach age five, Huang said.

Children over the age of five have mature immune systems that protect against severe symptoms with enterovirus infections, he said.

For children under the age of two months, researchers might investigate whether vaccinating a pregnant woman could provide antibodies to a fetus, Huang said.