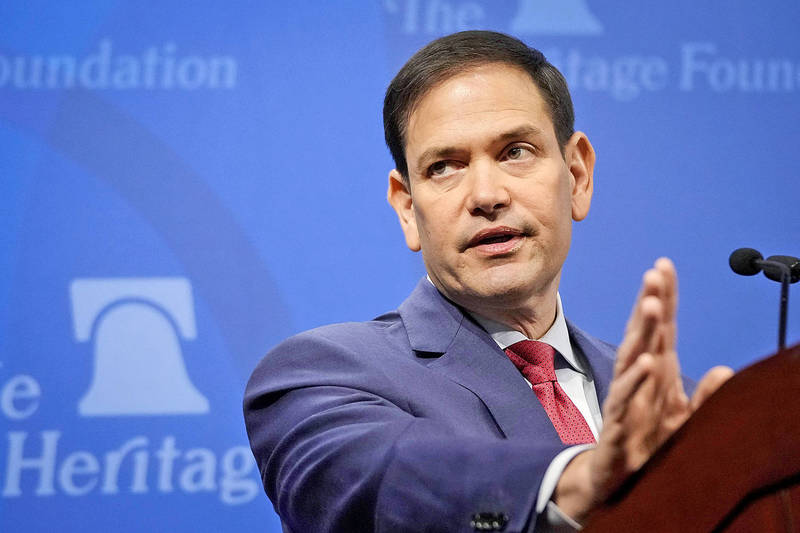 US Senator Marco Rubio speaks at the Heritage Foundation in Washington on March 29. Photo: AFP

HYBRID WARFARE: The US is also partnering with Taiwan, which is at the front line of China’s disinformation campaign, to build up Taipei’s resilience, Antony Blinken said

US Senator Marco Rubio on Tuesday introduced a bill aimed at fast-tracking the transfer of US weapon systems to Taiwan and improving joint military training to make sure Taiwan can defend itself in case of a Chinese invasion.

In a statement released by his office, Rubio said he proposed the bill because Russia’s invasion of Ukraine would not be the last time an authoritarian regime invades its neighbor.

“An invasion of Taiwan could happen within this decade. Taiwan needs our support,” he said, adding that the bill he introduced “will make [Chinese President] Xi Jinping [習近平] and the Chinese Communist Party think twice before launching a foolish invasion.”

Called the Taiwan peace through strength act, the bill requires the US Department of Defense to conduct an annual review of US war plans to defend Taiwan and develop a list of specific capabilities that Taiwan is approved to acquire based on that assessment, the statement said.

The bill requires the department to fast-track foreign military sales （FMS） to Taiwan by requiring the US Department of State to preclear the capabilities identified in the department’s annual review for expedited transfer to Taiwan, it said.

It also asks the department to compel defense contractors to place Taiwan’s FMS orders ahead of those of other countries on the production line, regardless of the order in which the contracts were signed.

It further proposes to amend the Taiwan Relations Act to replace “outdated language regarding ‘arms of a defensive character’ with new language that sets an enhanced standard for arms sales to deter conflict with the PLA [People’s Liberation Army].”

The bill also recommends the establishment of a comprehensive joint training program aimed at improving Taiwan’s defense capabilities, among others.

In related news, US Secretary of State Antony Blinken on Tuesday said that Washington is partnering with Taipei to build greater resilience against Beijing’s disinformation efforts.

Asked to comment on the US Department of State’s repeated warnings that China has tried for years to pressure media outlets in Taiwan to not publish articles critical of Beijing, Blinken said that Taiwan is “quite literally on the front lines of the PRC’s [People’s Republic of China’s] hybrid warfare, including disinformation and cyberattacks.”

Such warfare is designed to distort the information environment and democratic processes, he said at a press event at the state department’s Washington Foreign Press Center on World Press Freedom Day.

To counter such attacks, the US has joined with Taiwanese authorities and civil organizations “to support independent, fact-based journalism, to try to build societal resilience to disinformation and other forms of foreign interference,” he said.

Blinken said that US President Joe Biden’s administration has made it clear that free speech is incredibly important at home and around the world.

He reiterated Washington’s deep concern that Beijing has been misusing technology to increase “surveillance, harassment, intimidation, censorship of PRC citizens, of journalists, of activists and others.”

He also accused leaders in Beijing of using the free and open media to spread propaganda and disinformation, and to threaten critics even outside China’s territory.

“We’ve condemned and we’ve taken action against these efforts, and we’ll continue to defend the principles of a free press, an open, secure, reliable and interoperable Internet, and the benefits that flow from it,” he said.

US Secretary of State Antony Blinken speaks at a World Press Freedom Day briefing at the US Department of State’s Washington Foreign Press Center on Tuesday. Photo: CNA