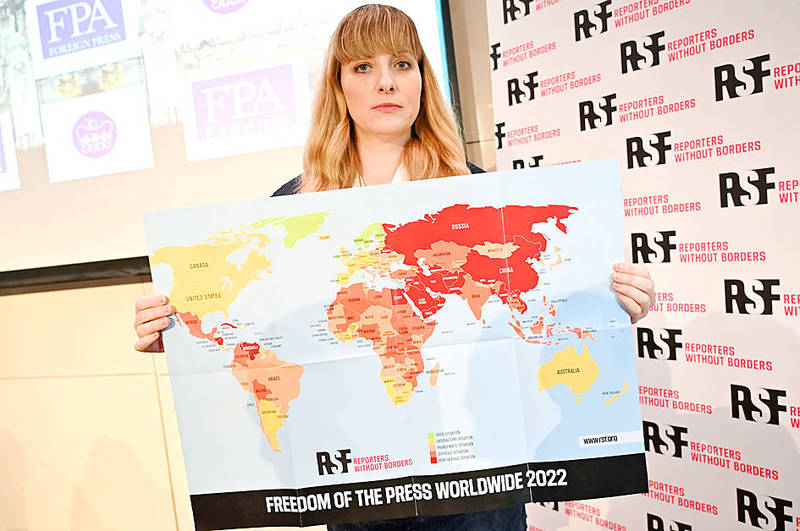 ‘GETTING WORSE’: Hong Kong’s latest ranking showed ‘one of the biggest downfalls ever in our index over the past 20 years,’ Cedric Alviani of Reporters Without Borders said

Despite Taiwan moving up five places to No. 38 in the World Press Freedom Index released yesterday by Reporters Without Borders （RSF）, the organization said more needed to be done to address a “toxic” working environment for journalists.

Taiwan’s ranking placed it fourth in the Asia-Pacific region, behind New Zealand （11th）, East Timor （17th） and Bhutan （33rd）, but ahead of Australia （39th） and South Korea （43rd）.

Taiwan was among the 40 countries listed in the index as having a “satisfactory” media environment.

The index’s top three spots went to Norway, Denmark and Sweden in that order, with the three Nordic countries considered to have a “good” media environment.

Commenting on the latest index, Cedric Alviani, head of RSF’s East Asia Bureau, said the change in Taiwan’s ranking did not reflect the nation’s improvement, but was rather the result of a modified way of compiling the index.

“This year, Taiwan moving up five ranks does not reflect any significant improvement in terms of press freedom,” Alviani told the Central News Agency during a telephone interview yesterday. “So the movement is purely due to the new system we used to make the index.”

This change of criteria enabled the index to better reflect the current press freedom situation of every country, Alviani said.

While Taiwan has a favorable ranking, its press freedom situation has been “impaired” by some “serious problems,” he said.

Political polarization and the sensational approach that Taiwanese media take to report certain news pose an “obstacle” to the public getting factual and objective information, Alviani added.

RSF had for the past year repeatedly called on the government to take some measures to address these problems, such as providing serious funding for public broadcasters without compromising their editorial independence, he said.

He also said the working environment for journalists was “quite toxic” and that such a situation continued to impact Taiwan’s press freedom.

Many young journalists have changed jobs after a few years of work because they were underpaid and overworked, and because it was not possible for them to do quality reporting as they had been expected to do, Alviani said, citing RSF’s past interviews and discussions with Taiwanese journalists.

In East Asia, the press freedom situation is “getting worse,” he said.

In particular, the ranking of Hong Kong showed “one of the biggest downfalls ever in our index over the past 20 years,” Alviani said.

Hong Kong ranked 148th in this year’s index, slipping 68 spots from No. 80 in the previous ranking.