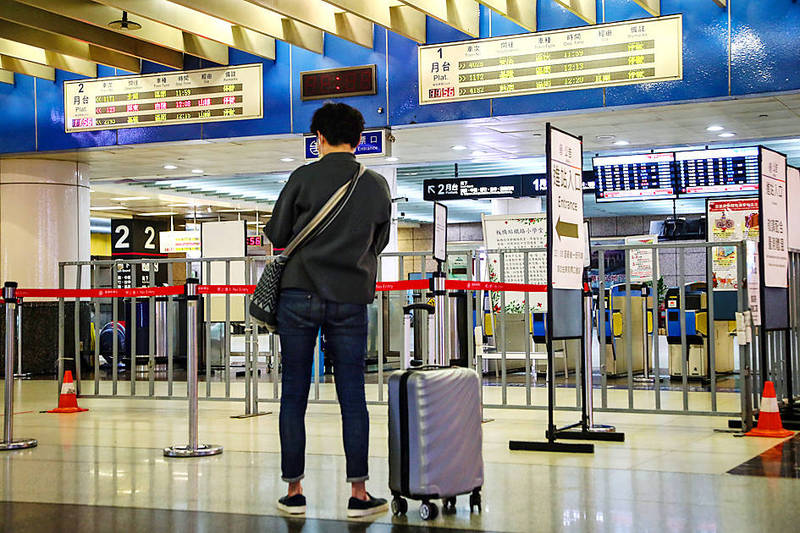 A woman stands next to luggage in New Taipei City’s Banqiao Station yesterday after finding that services had been suspended due to a strike by Taiwan Railways Administration drivers. Photo: CNA

EXPERIENCE VS IDEAS: A union board director said ground-level staff need to be included in efforts to improve safety, as railway incidents are still occurring

As smooth travel was reported nationwide, despite a Taiwan Railways Administration （TRA） strike yesterday, Minister of Transportation and Communications Wang Kwo-tsai （王國材） said that his ministry and the workers’ unions share the goal of making the TRA better.

About 13,000 of the TRA’s 16,000 workers took Workers’ Day off yesterday to protest the government’s plan to corporatize the railway agency without first negotiating with staff.

Staff at railway stations said that most people seemed to be prepared for the disruption in service, as only a small number arrived at train stations unaware of the suspension in service.

At a protest on Ketagalan Boulevard in Taipei yesterday, the TRU said ground-level TRA staff should be included in the government’s efforts to enhance railway safety.

Wang said that his ministry and the workers’ unions share the goal of making the TRA better and offering people a safer and more punctual railway service.

“We hope that both sides can reach a consensus with more communication,” Wang said during an inspection at Taitung Railway Station.

At the protest, TRU chairman Wang Chieh （王傑） said that although President Tsai Ing-wen （蔡英文） has encouraged workers to speak up if their employers continue to ignore their requests, and has said the welfare of workers is always on her mind, the government has yet to respond to the TRU’s requests for comprehensive safety reform.

“We do not oppose the plan to corporatize the TRA, which was proposed following two major fatal derailments,” he said. “We are the ones who want a safe railway service the most, but the government continues to stigmatize employees for not working on International Workers’ Day.”

Although the TRA told the public that it has established a safety management system to ensure a safe railway service, no frontline TRA workers were involved in setting it up, TRU board director Liu Chung-shu （劉仲書） said.

“The system has also increased the paperwork that workers have to handle on a daily basis. This only highlights that it never occurred to the TRA that it needs to fundamentally revamp its safety standards to run a modernized railway operation,” Liu said.

The TRA laid the blame on its workers, whose reluctance to execute safety regulations explains why there is a lack of progress in safety reform, he said.

“Any systemic change will only elevate the risk of occupational safety hazards if it is done without first communicating with ground-level employees,” Liu said. “If the agency has made substantial progress in safety reform, how do you explain the numerous railway incidents that are still happening?”

Despite the strike, the TRA’s railway lunchboxes remained in high demand yesterday, selling out by 12:30pm.

“Tears of Taroko,” a group formed by families of victims who died in a Taroko Express derailment last year, said in a statement that the TRA should abandon lunchbox sales this year and instead focus on providing a safe railway service.

“The government, the Legislative Yuan, experts and victims’ family members should jointly push for institutional reform at the agency to ensure that safety procedures are thoroughly executed,” it said.

The group also agreed with the government’s plan to corporatize the TRA.

“Although one cannot equate corporatizing TRA with safety, it is an opportunity to change the agency’s culture and address the issue of uneven work distribution,” the group said.

Members of the Taiwan Railway Union hold banners and signs outside the Presidential Office in Taipei yesterday urging President Tsai Ing-wen to consider the welfare of railway workers and the safety of the railway service. Photo: Peter Lo, Taipei Times

Staff from the Directorate-General of Highways hold signs directing passengers to a shuttle service at a train station in Yilan County yesterday. Train services had been suspended due to a strike by Taiwan Railways Administration drivers. Photo: CNA