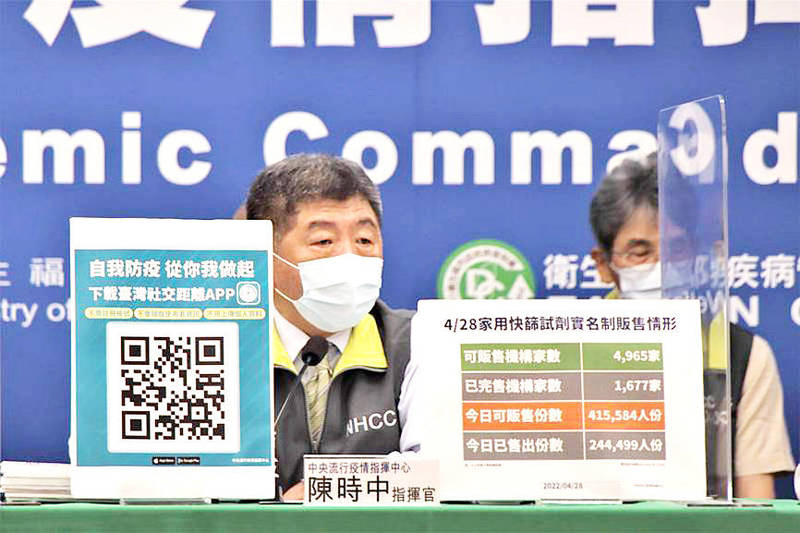 Minister of Health and Welfare Chen Shih-chung holds an information board at the Central Epidemic Command Center’s （CECC） daily news briefing in Taipei yesterday. Photo courtesy of the CECC

NEW APPROACH: As Taiwan reported more than 10,000 daily cases for the first time, a self-reporting system would make it easier to track contacts, the health minister said

By Chiu Chih-jou and Liu Tzu-hsuan / Staff reporter, with staff writer and CNA

The Central Epidemic Command Center （CECC） yesterday announced a self-reporting system for people who test positive for COVID-19, as local infections continue to rise, with the center reporting more than 10,000 cases in a single day for the first time.

Under the system, which starts on Sunday, the government would alert anyone who tests positive for COVID-19 in a polymerase chain reaction test taken at a hospital or clinic with a text message telling them to fill out a form online, said Centers for Disease Control Deputy Director-General Chuang Jen-hsiang （莊人祥）, who is the CECC’s spokesman.

The message would include a single-use link for the recipient to provide information to determine if they are at risk of developing severe symptoms, such as whether they are pregnant or undergoing dialysis, he said.

Additionally, they would provide information on close contacts, such as people they live, work or attend school with, he said.

The system would then send isolation notices to the close contacts provided, he added.

Minister of Health and Welfare Chen Shih-chung （陳時中）, who heads the CECC, said that people confirmed to have COVID-19 would first receive a telephone call to verify their identity, followed by the text message.

Parents or designated guardians should fill in the information for children under the age of 12, he said.

The self-report system can expedite the process of contacting close contacts, he added.

Under the current system, information on contacts is gathered directly by government staff from people who tested positive. Critics say staff have been overwhelmed amid a surge in local cases.

Yesterday’s 11,517 cases — 11,353 domestic infections and 164 among people arriving from abroad — was a new single-day high and the first time that Taiwan had reported more than 10,000 daily cases.

Of the 51,663 domestic cases recorded nationwide from Jan. 1 to Wednesday, 142 were classified as having moderate symptoms and 17 as severe, accounting for 0.27 percent and 0.03 percent of the total respectively.

All other cases have displayed either mild or no symptoms, the CECC said.

Chen yesterday announced that Taiwan has signed a procurement contract to purchase about 4 million doses of the Pfizer-BioNTech COVID-19 vaccine.

Chen said he hoped the first batch of the new Pfizer-BioNTech vaccines would arrive by the middle of next month.