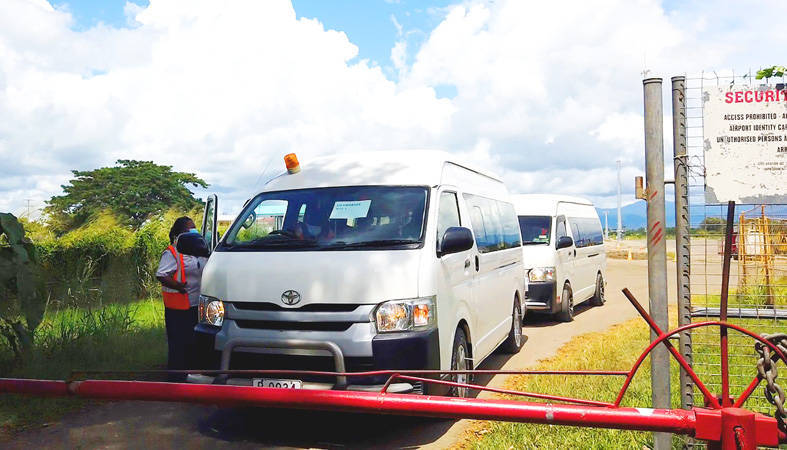 A US diplomatic team led by the US National Security Council Indo-Pacific Coordinator Kurt Campbell and US Assistant Secretary of State for East Asian and Pacific Affairs Daniel Kritenbrink leave the airport for talks with the Solomon Islands government in Honiara on Friday. Photo: AFP

‘DEMOCRATIC LEADER’: As an important economic and security partner, there is much to be gained from working with Taiwan, a senior US official for the Pacific said

By Lu Yi-hsuan and Kayleigh Madjar / Staff reporter, with staff writer and the Guardian

The US has continually proclaimed Taiwan to be an important democratic leader and beneficial partner, a senior US official for the Pacific said yesterday after concluding a visit to Taiwan’s former diplomatic ally the Solomon Islands, which earlier this month signed a secretive defense pact with Beijing.

US Assistant Secretary of State for East Asian and Pacific Affairs Daniel Kritenbrink on a call with reporters emphasized that Taiwan remains a strong partner to its allies in the region — the Marshall Islands, Nauru, Palau and Tuvalu.

As an important economic and security partner, there is much to be gained from working with Taiwan, he said.

However, Kritenbrink on several occasions emphasized that the US would never ask nations to choose between Washington and Beijing, as states should be able to make decisions free of coercion.

Kritenbrink had returned from a trip to Fiji, Papua New Guinea and the Solomon Islands as part of a high-level US delegation that included US National Security Council Indo-Pacific Coordinator Kurt Campbell.

On Friday, the team held a 90-minute “constructive and candid” meeting with Solomon Islands Prime Minister Manasseh Sogavare, in which the US delegation detailed concerns about the nation’s security deal with China.

Asked about the potential of military action against the Solomon Islands if it allows China to establish a military base there, Kritenbrink yesterday refused to rule it out, saying that the deal presented “potential regional security implications.”

“We wanted to outline for our friends in the Solomons what our concerns are,” Kritenbrink said.

“Prime Minister Sogavare indicated that in the Solomon Islands’ view, the agreement they’ve concluded has solely domestic implications, but we’ve made clear that there are potential regional security implications of the agreement not just for ourselves, but for allies and partners across the region,” he said.

He also reiterated the US’ willingness to act in the region if a military base is established by China.

“Of course, we have respect for the Solomon Islands’ sovereignty, but we also wanted to let them know that if steps were taken to establish a de facto permanent military presence, power projection capabilities or a military installation, then we would have significant concerns, and we would very naturally respond to those concerns,” he said.

Asked what that response could involve, he said: “Look, I’m not going to speculate, and I’m not in a position to talk about what the United States may or may not do in such a situation.”

US President Joe Biden’s administration said in a statement last week that Washington would “respond accordingly” if China was allowed to establish a long-term presence in the Solomon Islands, while noting assurances from Sogavare that he had no intention of allowing a military base.

“I think it’s important in this context to keep in mind that we do know that the PRC [People’s Republic of China] is seeking to establish a more robust overseas logistics and basic infrastructure that would allow the PLA [People’s Liberation Army] to project and sustain military power at greater distances,” he said. “So we wanted to have that candid conversation with our friends in the Solomons. We outlined our concerns ... and we’ve indicated that we’ll continue to monitor the situation closely and continue to engage with them going forward.”

The text of the security deal is secret, although Solomon Islands lawmakers have called for the prime minister to publicly release it.

“I think it’s clear that only a handful of people in a very small circle have seen this agreement, and the prime minister himself has been quoted publicly as saying he would only share the details with China’s permission, which I think is a source of concern as well,” Kritenbrink said.