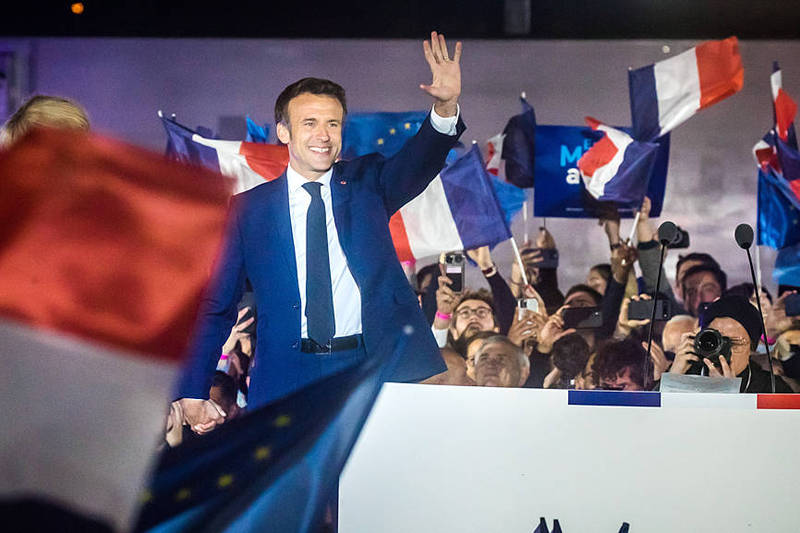 ‘GREAT NEWS’: French President Emmanuel Macron’s re-election sparked relief across Europe, where he has been seen as a guarantor of continuity

French President Emmanuel Macron yesterday sought to unite a deeply divided nation after winning re-election in a battle against rival Marine Le Pen that saw the far right come its closest yet to taking power.

Centrist Macron won 58.54 percent of the vote in the presidential election runoff compared with 41.46 for Le Pen, final results from the French Ministry of the Interior showed.

Macron is the first French president in two decades to win a second term and his victory prompted a sigh of relief throughout Europe that the far right had again been thwarted from taking power in the key EU state, but his latest victory over his rival was narrower than their last face-off in 2017, when Macron won more than 66 percent, and Le Pen’s result was the best ever for the far right.

The president already has a daunting in-tray, ranging from preparing for parliamentary elections as soon as June to implementing explosive pension reform plans and dealing with the Russian invasion of Ukraine.

Addressing his supporters in the shadow of the Eiffel Tower in Paris late on Sunday, Macron vowed to heal rifts in a deeply divided nation.

“From now on, I am not the candidate of one camp, but everybody’s president,” he said. “An answer must be found to the anger and disagreements that led many of our compatriots to vote for the extreme right.”

Turnout was the lowest in any presidential election runoff since 1969 and, in another striking sign of disenchantment with politics, 8.6 percent of people who voted either delivered a blank ballot or spoiled their papers.

The 44-year-old president now faces the challenge of parliamentary elections, where keeping a majority would be critical for his ambitions.

In a sign of roadblocks ahead, two polls published late on Sunday showed that most voters do not wish for him to also carry the parliamentary vote.

“Macron’s biggest challenge will be to create a sense of cohesion in an extremely fragmented country,” said Tara Varma, senior policy fellow and head of the Paris office of the European Council on Foreign Relations.

Conservative daily Le Figaro said that after all the challenges of his first term, Macron’s win was “no mean feat,” but also asked: “Who can possibly believe that it is rooted in popular support?”

For Le Pen, her third defeat in a presidential poll was a bitter pill after years of effort at making herself electable.

Le Pen, 53, on Sunday said that she would “never abandon” the French and was already preparing for the parliamentary elections.

Macron’s re-election sparked relief across Europe, where he has been seen as a guarantor of continuity.

Ukrainian President Volodymyr Zelenskiy told Macron he was “a true friend of Ukraine.”