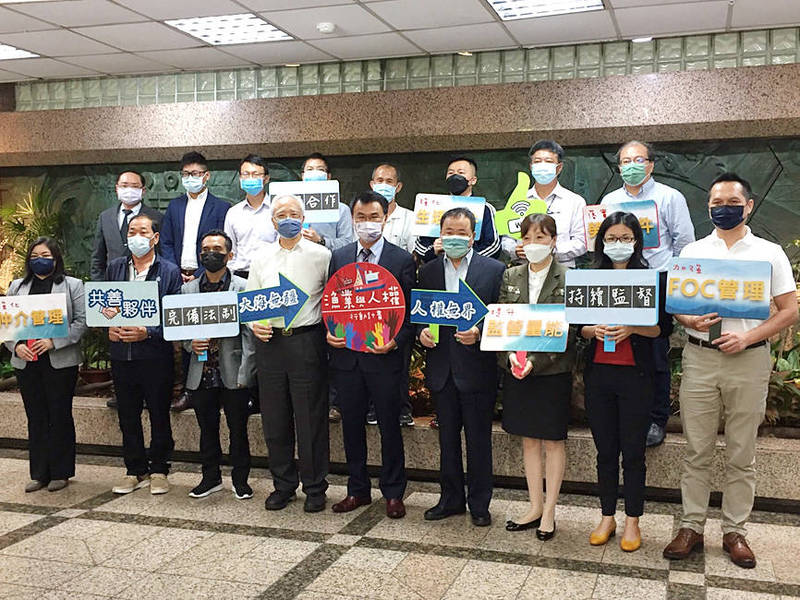 Minister of Agriculture Chen Chi-chung, center front, and other officials hold signs at a news conference in Taipei yesterday to unveil the Fisheries and Human Rights Action Plan. Photo: CNA

DISTANT-WATER FLEET: The rule changes include that salaries must be paid directly to fishers instead of through an agency, and workers must have medical insurance

By Yang Yuan-ting and Jake Chung / Staff reporter, with staff writer and CNA

The minimum monthly wage for migrant fishers working on Taiwanese-owned distant-water fishing vessels is to be increased by US$100 with effect from July, the Council of Agriculture （COA） said yesterday.

The Cabinet approved the minimum wage hike on Thursday as part of a broader plan to improve working conditions for migrant fishers, the council said.

The plan is to raise the monthly minimum pay for that category of migrant fisher from US$450 to US$550, the COA said, adding that there are about 21,000 migrant workers onboard Taiwanese-owned distant-water fishing vessels.

The salaries must be paid directly to the fishers instead of through an employment agency, and the workers have the right to contact the COA if their employers fail to adhere to that regulation, Fisheries Agency Director-General Chang Chih-sheng （張致盛） said.

Under the plan, the government has made it mandatory for migrant fishers on such vessels to have medical insurance coverage of at least NT$300,000 （US$10,253）, while their accident insurance coverage has been increased from NT$1 million to NT$1.5 million.

Furthermore, crews would no longer be permitted to remain at sea for more than 10 consecutive months.

The plan was devised to improve livelihoods and human rights in the industry, the COA said.

To that end, the COA said it would step up inspections of Taiwan’s approximately 1,100 distant-water fishing vessels and encourage owners to install closed-circuit TV systems onboard to allow better monitoring of work conditions.

Port inspections would be conducted not just on Taiwan-flagged fishing vessels, but also on Taiwanese-owned boats flying a foreign flag, known as flags of convenience, it said.

Taiwan Deepsea Tuna Longline Boatowners and Exporters Association president Lin Yu-chih （林毓志） yesterday said that the new rules have given fishing boat owners pause, with some reconsidering whether to continue in the industry.

Every fishing boat owner — regardless of the size of the ship — is losing money the moment the ship leaves harbor, he said.

On top of expenditures, deep-sea fish, such as tuna, are not fetching ideal prices, and in the case of restaurants having closed through the entirety of last year, fish are being sold at rock-bottom prices, he said.

However, despite the difficulties, Lin said that he would support the project because the industry wants to expand abroad.

Moreover, he is touched by the hard work of the government, he said.

COA Minister Chen Chi-chung （陳吉仲） said that the council would offer subsidies amid the industry transition.

A total of NT$640 million would be used to promote and uphold human rights in the industry, while the COA would spend NT$2 billion over four years to improve crew members’ rights, Chen said.