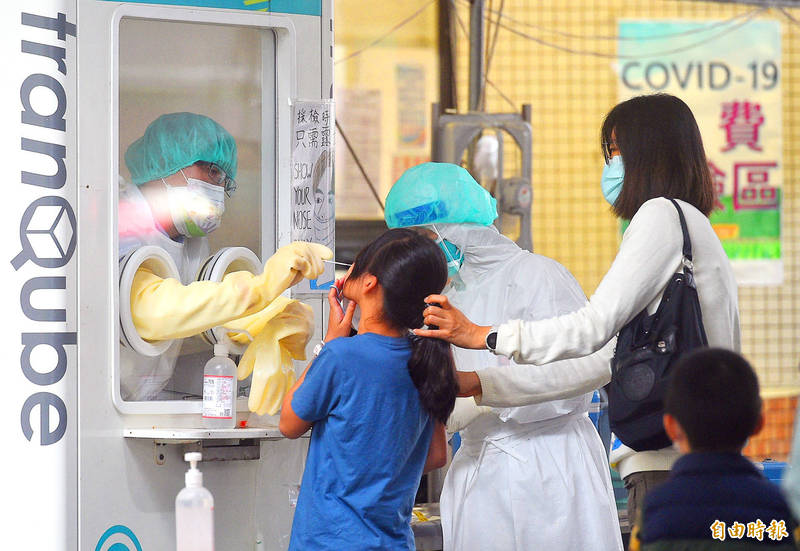 The government is mulling using COVID-19 tests instead of home isolation for people exposed to the virus in a bid to limit the disease’s social impact, Minister of Health and Welfare Chen Shih-chung （陳時中） said yesterday.

The proposed measure, which would apply to people who had three or more COVID-19 vaccine jabs, would first be implemented among healthcare workers, then to workers who provide vital services and later on possibly the public as a whole, said Chen, who heads the Central Epidemic Command Center （CECC）.

The plan is to be finalized at the end of the week, he said, adding that officials are mostly in favor of the policy, and limiting discussions to the pace and scope of the measures.

The policy already applies to a limited number of medical workers, he added.

The Taipei City Government is placing people in isolation at a rate of 10.6 close contacts per confirmed case, which would translate into 300,000 people being added to the home isolation list, she wrote on Facebook.

Huang and Taipei Mayor Ko Wen-je （柯文哲） have been isolating at their homes since Sunday after being exposed to a person with COVID-19 at a Taipei City Hall function.

The number of people placed in isolation could reach 1 million, assuming current pandemic trends continue, she said, adding that the figure does not include children staying home due to school closures or people taking leave to care for sick family members.

This level of isolations would seriously strain the nation’s healthcare workers, public services and economic activity, she said.

Isolation protocols should be relaxed for those who had three vaccine jabs so that medical and government resources could be directed toward people with moderate or severe COVID-19 symptoms, she said, citing declining rates of COVID-19 deaths.

The easing of isolation standards should apply in particular to healthcare workers, she said.

That home isolation for large swathes of close contacts had been effective in Taiwan was mainly due to the government’s success in suppressing the pandemic, which is no longer the case, she said, adding that the nation should learn from New Zealand’s COVID-19 response.

“The government should face reality and tell the public honestly that the country has changed its policy to living with COVID-19,” she said. “The government’s main job should be conserving medical capacity for those who need it the most and maintaining the normal functioning of society.”

The projection, which has a confidence level of 95 percent, falls in a range of 6,180 to 15,583 cases, he said, adding that the upper range is highly unlikely to occur.

Asked whether the local outbreak would peak next month, Chen told a CECC news briefing that the outbreak is likely to play out in one or two months, but not sooner.

Taiwan currently reports about 170 new cases per 100,000 people, which is extremely low compared with an infection rate of 16 percent in Hong Kong and New Zealand, or 20 percent rate in Australia and Singapore, he said.

An infection rate of 20 percent would translate to about 4.6 million people infected in Taiwan, at which point the country is to transition to living with COVID-19 model and no additional in-dining restrictions would be necessary, he said.