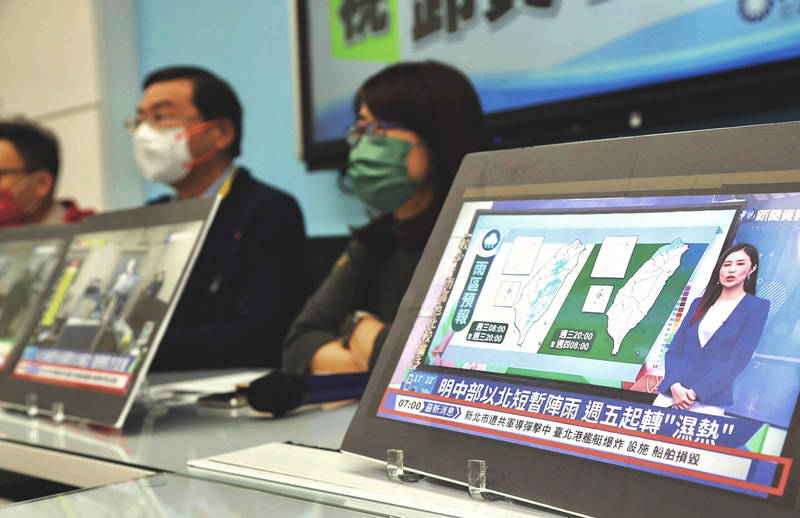 Chinese Nationalist Party （KMT） legislators hold up placards at a news conference at the legislature in Taipei yesterday, urging the National Communications Commission to penalize Chinese Television System for broadcasting false information about an invasion by China. Photo: CNA

The news alerts were created by the New Taipei City Fire Department for disaster drill purposes.

As of 2pm, the NCC had received complaints from seven viewers about the network’s error, NCC Deputy Chairman and spokesman Wong Po-tsung （翁柏宗） said at a weekly news conference.

Officials from the NCC’s broadcasting and content department and infrastructure and cybersecurity department visited CTS’ Taipei headquarters yesterday afternoon for an administrative inspection, Wong said, adding that CTS’ ethics committee was told to convene immediately to address the problem.

“CTS management will be asked to come to the NCC and answer questions from commissioners,” Wong said, adding that the commission would review the case based on standard procedures after verifying all information.

The public has high expectations of CTS, as it is part of the government-funded Taiwan Broadcast System （公廣集團）, Wong said.

“As a terrestrial television service, CTS is a key infrastructure, and the accuracy of the information it transmits should be scrutinized using higher standards,” he said.

CTS apologized for the error.

“We were tasked by the New Taipei City Government to shoot a disaster drill video, with the script provided by the New Taipei City Fire Department,” CTS said. “The news producer who recorded the video used a horizontal screen layout with news tickers, which was done through a change in the path of a text file link. However, the producer did not restore the file link path after completing the recording on Tuesday, resulting in the error in the morning news program.”

The error was found at 7:49am and corrected immediately, CTS said, adding that all personnel involved would be held accountable.

Asked about the network’s statement, Wong said that the commission would ascertain if CTS was telling the truth by examining how it helps New Taipei City transmit disaster drill messages.

“The network’s quality control mechanism clearly has room for improvement if it broadcasts morning news without checking if every system is in order,” Wong said.

In March 2020, CTi News was fined NT$800,000 for running a news ticker saying that the nation would go into lockdown in six days due to a COVID-19 outbreak.

The Ministry of Culture, which oversees Taiwan Broadcasting System, also apologized for the CTS incident.

“It was a mistake that should by no means have occurred in the first place,” Minister of Culture Lee Yung-te （李永得） said. “CTS has been ordered to review the incident and submit a report about it. It must not commit such an error again.”

Chinese Nationalist Party （KMT） Legislator Lin Yi-hua （林奕華） said that the NCC should remove CTS from Channel 52 because of this major oversight.

Chinese Television System （CTS） is alleged to cause public panic by mistakenly running news tickers about a Chinese invasion and disaster yesterday. Photo: Screengrab from CTS