《TAIPEI TIMES》 ‘Liaoning’ may be vulnerable like ‘Moskva’: report 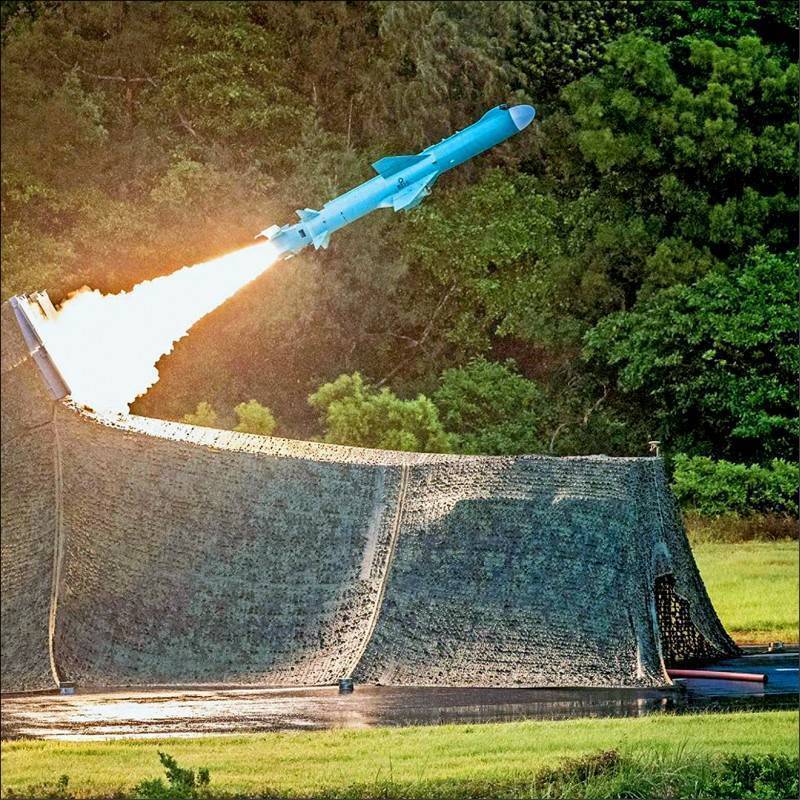 Hsiung Feng II missile is pictured in an undated military drill. Photo: Screengrab from video of Ministry of National Defense

FIGHTING FORM: A defense expert said that Taiwan has better anti-ship missiles than Ukraine, which used local missiles to strike and sink the Russian guided-missile cruiser

China’s Soviet-build aircraft carrier Liaoning could be as easily sunk as the flagship of Russia’s Black Sea fleet, the Nikkei Shimbun reported yesterday.

The Russian guided-missile cruiser Moskva sank on Thursday last week after Ukraine said it struck the ship with locally made Neptune anti-ship missiles. Russia has denied the ship was hit, instead saying it sank after a fire broke out on the vessel.

The ease with which the Moskva was sunk has shocked Chinese defense officials, who fear the Liaoning could be similarly vulnerable in a military conflict, the Nikkei reported.

The Liaoning was originally the Kuznetsov-class carrier Varyag, which China bought from Ukraine in an unfinished state after it was stripped of equipment.

Beijing also purchased the hulls of two other Soviet-era carriers, the Kiev and the Minsk, for study and refitting.

All three ships were laid down in the Mykolaiv Shipyard in Ukraine, the paper said.

Armor standards used in Russian warships built during the Cold War suggest that the Liaoning might not fare any better than the Moskva against anti-ship missiles, the newspaper cited an expert as saying.

Should a conflict break out in the Taiwan Strait, the Chinese navy might avoid deploying the Liaoning, as the ship could be too vulnerable, the expert said.

While China’s newer Shandong and yet-unnamed third carrier likely have improved defenses, they would remain in missile range when sailing toward Taiwan or the Pacific, they said.

That Russia — widely considered to have overwhelming superiority in equipment, troop numbers and financial resources — would flounder in its invasion of Ukraine has disturbed the Chinese government, they said.

Taiwan is protected by the sea and could use its mountain ranges as natural fortifications, which makes the nation a harder target than Ukraine, the expert said, adding that China is more vulnerable than Russia to sanctions due to its reliance on energy and food imports.

Speaking on condition of anonymity, a Taiwanese defense official said that Taiwan is buying 100 ground-launched Harpoon anti-ship missiles in addition to variants that can be fired from ships, submarines and aircraft.

The number and type of missiles to be purchased are based on the projection that Taiwan needs to sink 70 percent of a hostile amphibious ship group to stop an invasion plan from being executed, they said.

China must use its capital ships to escort an amphibious vessel group in an invasion of Taiwan, he said, adding that Taiwan’s Hsiung Feng III missiles can hit targets anywhere in the Strait.

The Taiwanese military’s emphasis on mobility and variety of launch platforms for its anti-ship missiles are broadly correct, Chen said, adding that miniaturizing Hsiung Feng II missiles for use by fighter aircraft should be considered for increased tactical flexibility.

In related news, the Ministry of National Defense in a classified report to the Legislative Yuan yesterday revealed that Hsiung Sheng surface-to-surface cruise missiles can be mounted with high-explosive or cluster munition warheads.

That means the Hsiung Sheng — which has a range of 1,000km to 1,200km — could attack ground targets in China, including fortified command centers and airfields, by using the warheads, a source familiar with the report said.

The missiles would supply long-range precision strike capability for the military’s deterrence strategy, the source said.

Taiwan would have the capacity to produce 113 missiles per year after the Chungshan Institute of Science and Technology’s manufacturing facilities come online, it said.

The number of missiles the military would actually obtain has not been made public.