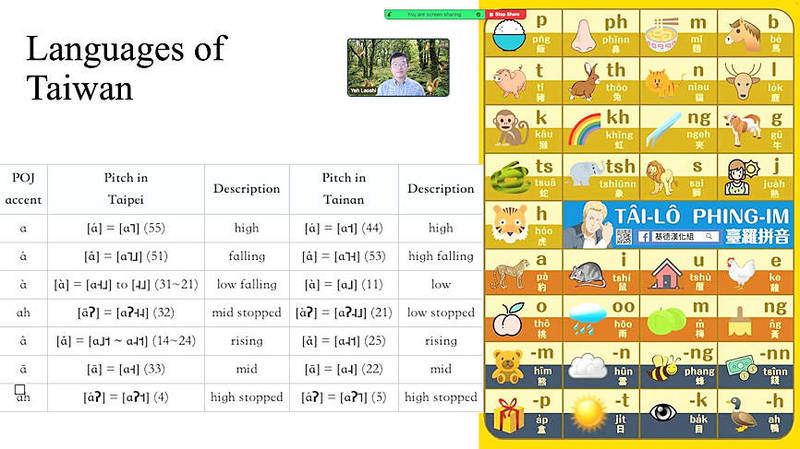 A phonetic chart for a Taiwanese language and culture course taught at the University of California, Los Angeles, is pictured in an undated photograph. Photo courtesy of the Ministry of Education

A course on the languages and cultures of Taiwan at the University of California, Los Angeles （UCLA）, has been taken by nearly 100 students in the past two years.

UCLA launched the Taiwan Studies Lectureship in 2014 and renewed it for another five years in 2020, said Pan Hui-chen （潘惠珍）, education section secretary at the Ministry of Education’s Department of International and Cross-strait Education.

The program is supported by the Ministry of Education and organized by the UCLA Asia Pacific Center, Pan said.

The course “Languages and Cultures of Taiwan,” which was planned and designed by UCLA graduate Tsai Lin-chin （蔡林縉）, was first offered in January 2020.

Students who enroll in the course are required to have taken Mandarin classes for at least a year.

The course compares Hoklo （also known as Taiwanese） with the Minnan languages used in Chinese communities in Southeast Asia.

Through pop music, Taiwanese opera, puppetry, media and documentaries in Hoklo, the students learn about Taiwanese languages and culture in the hope of showcasing the nation’s diversity.

The course has been taught by Yeh Hsin-hung （葉信鴻）, a lecturer at Santa Clara University, since the fall semester last year.

Yeh uses the concept of a “flipped classroom,” asking students to go through assigned materials and movies in advance and share their thoughts in class.

UCLA undergraduate Jao Li-ching （饒麗晴） said she only realized after taking the course the impact Japanese colonization has had on Taiwan and the nation’s many indigenous languages.