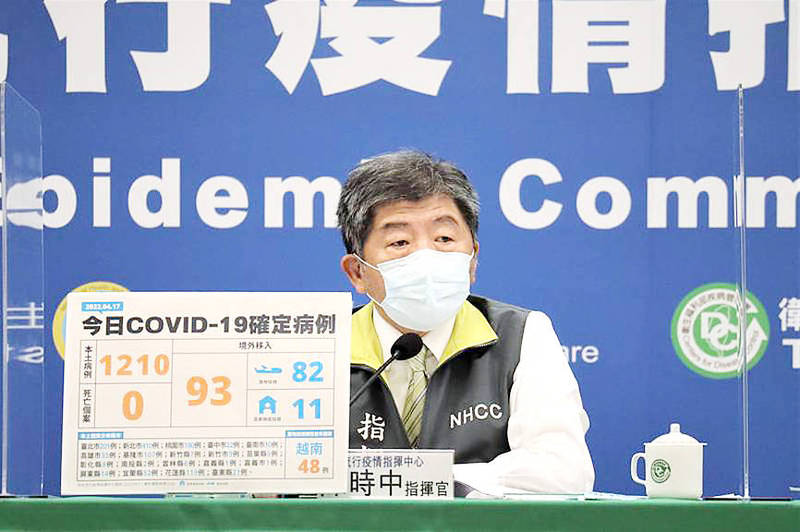 RISING RATE: Minister of Health and Welfare Chen Shih-chung estimated Taiwan has an infection rate of 15 percent, with 3.45 million people who might become infected

The Central Epidemic Command Center （CECC） yesterday distributed 400,000 rapid test kits to areas of Taiwan with the greatest risk of infection, as it reported 1,210 new domestic and 93 imported cases.

At this time, members of the public do not need to stock up on rapid test kits, as the price is to fall after a real-name rationing system is implemented, he added.

Asked whether more cities and counties would allow those who have asymptomatic or mild COVID-19 cases to isolate at home, Chen said that the six special municipalities — Taipei, New Taipei City, Taoyuan, Taichung, Tainan and Kaohsiung — have applied to do that, as well as Keelung, and Yilan and Hualien counties.

New Taipei City had the highest number of new domestic cases, with 410, followed by Taipei with 201, Taoyuan with 180, Hualien County with 119, Keelung with 107, Yilan County with 52 and Kaohsiung with 35, center data showed.

Asked whether the infection rate might surpass 20 to 30 percent, with domestic cases exceeding 1 million, Chen estimated Taiwan’s infection rate to be about 15 percent.

If the infection rate was 20 to 30 percent in Taiwan, there would be about 4.6 million to 6.9 million people infected with COVID-19, he added.

“With Taiwan’s experience in disease prevention, an infection rate of about 15 percent is more likely,” Chen said, adding that the center would use that figure for planning purposes.

“However, we will also need to closely monitor the actual situation over the next 15 days ... to see whether the number of local infections grows exponentially, but I believe we will be extra cautious,” he said.

If the infection rate is about 15 percent, an estimated 3.45 million people in Taiwan might become infected.

Meanwhile, seven new moderate cases of COVID-19 have been confirmed, Chen said, adding that as of Saturday, asymptomatic and mild cases accounted for 99.49 percent （8,902 cases） of domestic cases reported this year （8,948 cases）.

Centers for Disease Control Deputy Director-General Philip Lo （羅一鈞）, deputy head of the CECC’s medical response division, said that none of the seven moderate cases had been admitted to intensive care, but all of them had blood oxygen saturation levels of less than 94 percent and a few of them had pneumonia.

The center and pediatricians of the Taiwan Pediatric Association had discussed the warning signs and symptoms of severe COVID-19 in children, including recommendations to make to parents, Lo said.

Case classification criteria and procedures would be discussed with local health departments on Wednesday, he added.

Parents should avoid sharing meals and limit direct contact with uninfected children in home isolation to reduce the risk of infection, he said, adding that frequent and thorough disinfection of shared spaces would also reduce the risk.