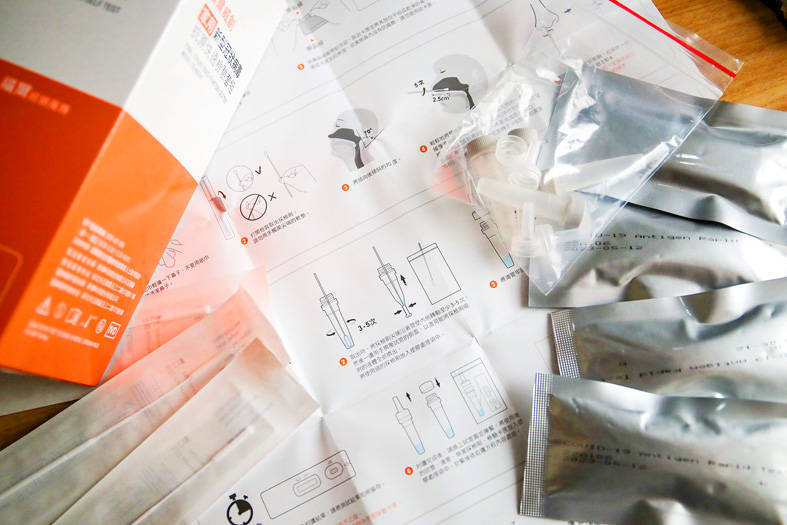 Rapid test kits for COVID-19 are pictured in an undated photograph. Photo: CNA

DOMESTIC CASE RECORD: The government is to introduce a rationing system that would allow people to buy kits at a cheaper rate by registering with their health card

By Lee Hsin-fang and Liu Tzu-hsuan / Staff reporter, with staff writer and CNA

Su made the remarks at the weekly Cabinet meeting amid calls by opposition lawmakers to regulate the supply of rapid tests and keep prices down.

In addition to requisitioning kits from domestic and overseas manufacturers, the armed forces also are to help with domestic production, Su said.

The need for the kits increased as local COVID-19 cases have increased since the Tomb Sweeping Day long weekend early this month, he said.

However, case numbers have not risen exponentially and 99.6 percent of people with the disease have mild or no symptoms, he said.

Rapid tests are being used instead of polymerase chain reaction （PCR） tests and disease prevention measures would be adjusted based on the pandemic situation, he said.

Su encouraged people to lead a normal life while practicing disease prevention measures, adding that Taiwan should be more tenacious, and strive to balance economic development and pandemic control.

In response to complaints that rapid test kits, which cost more than NT$300 each, are too expensive in Taiwan compared with the international average, Minister of Health and Welfare Chen Shih-chung （陳時中）, who heads the Central Epidemic Command Center （CECC）, said the government is to propose solutions to the problem in a few days.

Rapid test kits are available at stores, and those for people in isolation or quarantine, or in high-risk communities would be provided by the government, Chen said.

The government would introduce rapid test kit rationing, which would allow people to purchase them at a cheaper rate by registering with their National Health Insurance card, Centers for Disease Control Director-General Chou Jih-haw （周志浩） said.

There were 108 new imported cases reported, the data showed.

Most of the new infections are either mild or asymptomatic, the CECC said.

New Taipei City reported the most domestic cases, with 360, followed by Taipei with 164, Taoyuan with 87 and Keelung with 60, it said.

Chiayi City reported two cases, and Yunlin and Chiayi counties reported one each, the data showed.

The 874 new domestic cases yesterday was up from 744 the previous day, which broke the previous one-day high of 720 on May 22 last year, the CECC said.

Of the 5,670 domestic COVID-19 cases recorded nationwide this year through Wednesday, 17 were classified as moderate infections and two as severe, while the rest, or 99.66 percent, were either mild or asymptomatic, the CECC said.

The CECC said that one person who tested positive on April 2 had developed a moderate infection and his oxygen levels had dropped.

The patient, a Taiwanese man in his 60s, was unvaccinated, the CECC said, adding that he is now in stable condition in hospital.

In Hualien, all elementary and junior-high school classes were suspended today as a preventive measure, as several cases at a local hospital had not been counted, Hualien County Commissioner Hsu Chen-wei （徐榛蔚） said yesterday.

The county would also introduce the home isolation scheme adopted by the CECC that was trialed this week in New Taipei City.

Under the scheme, people aged 65 or younger who are not pregnant and not undergoing dialysis who have been ordered to isolate can do so at home.