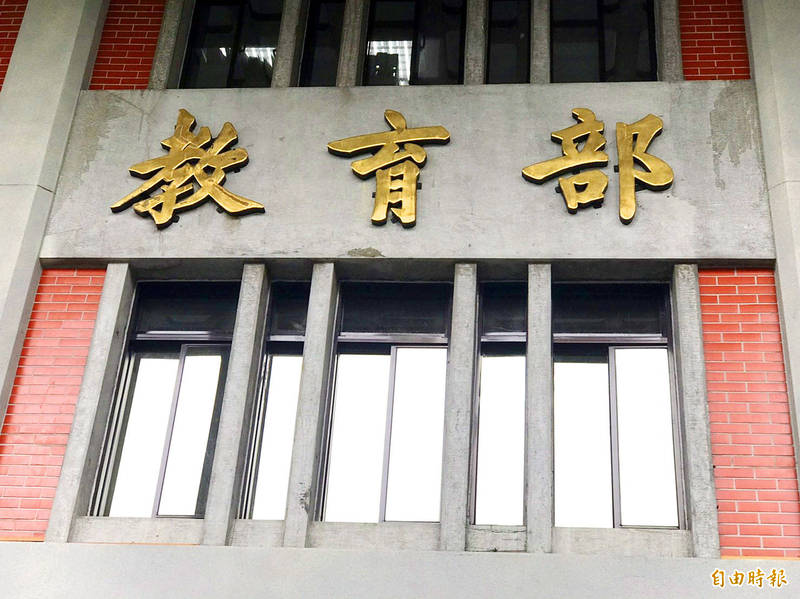 An entrance to the Ministry of Education in Taipei is pictured in an undated photograph. Photo: Rachel Lin, Taipei Times

ALMOST THERE: Legislators said that the nation is ready to accept their plan, as the enrollment rate of five-year-olds was already 96.67% in the 2020-2021 academic year

The Legislative Yuan’s Education and Culture Committee discussed the proposal and asked the Ministry of Education to deal with the matter.

KMT Legislator Wan Mei-ling （萬美玲） and 26 others said in their proposal that the enrollment rate of five-year-old children was 96.67 percent during the 2020-2021 academic year, indicating the nation’s readiness to accept that children of that age should receive mandatory education.

Independent Legislator Huang Kuo-shu （黃國書） agreed with the general direction of the proposal, but asked whether the ministry was prepared and when the amendment would be implemented if it passes.

The school system, teacher education, curriculum and other aspects would all be affected by the amendment, he added.

Democratic Progressive Party （DPP） Legislator Rosalia Wu （吳思瑤） also acknowledged the importance of the supporting policies related to issues such as the budget, space at schools, and software and hardware availability.

She urged the ministry to carry out a detailed assessment and set a timeline for each aspect involved, instead of hurriedly pushing for the new policy.

The high enrollment rate also meant that there were still about 5,000 five-year-olds who did not go to school, the reasons for which should be understood when considering the proposal, DPP Legislator Chang Liao Wan-chien （張廖萬堅） said.

Deputy Minister of Education Tsai Ching-hua （蔡清華） said that the ministry is preparing for the change through policies such as publicizing preschools and subsidizing education fees for children younger than six.

However, he said that it would take a long time to prepare space at non-profit preschools, the correct number of teachers, and the installation of software and hardware.

The ministry would take a year to study the matter by outsourcing research, holding public hearings, and communicating with city and county governments, he said.

DPP Legislator Fan Yun （范雲） said that the amendment had been assessed by the government before, and it was concluded that the expenses would be too high.

Research conducted this time around should focus on drawing up a budget, understanding the reasons the 5,000 children did not attend school and how to separate early childhood education from other levels of learning.

KMT Legislator Lin Yi-hua （林奕華）, the convener of the committee, said that outsourced research should not only explore the feasibility of the proposal, but also investigate the complementary measures and timeline.